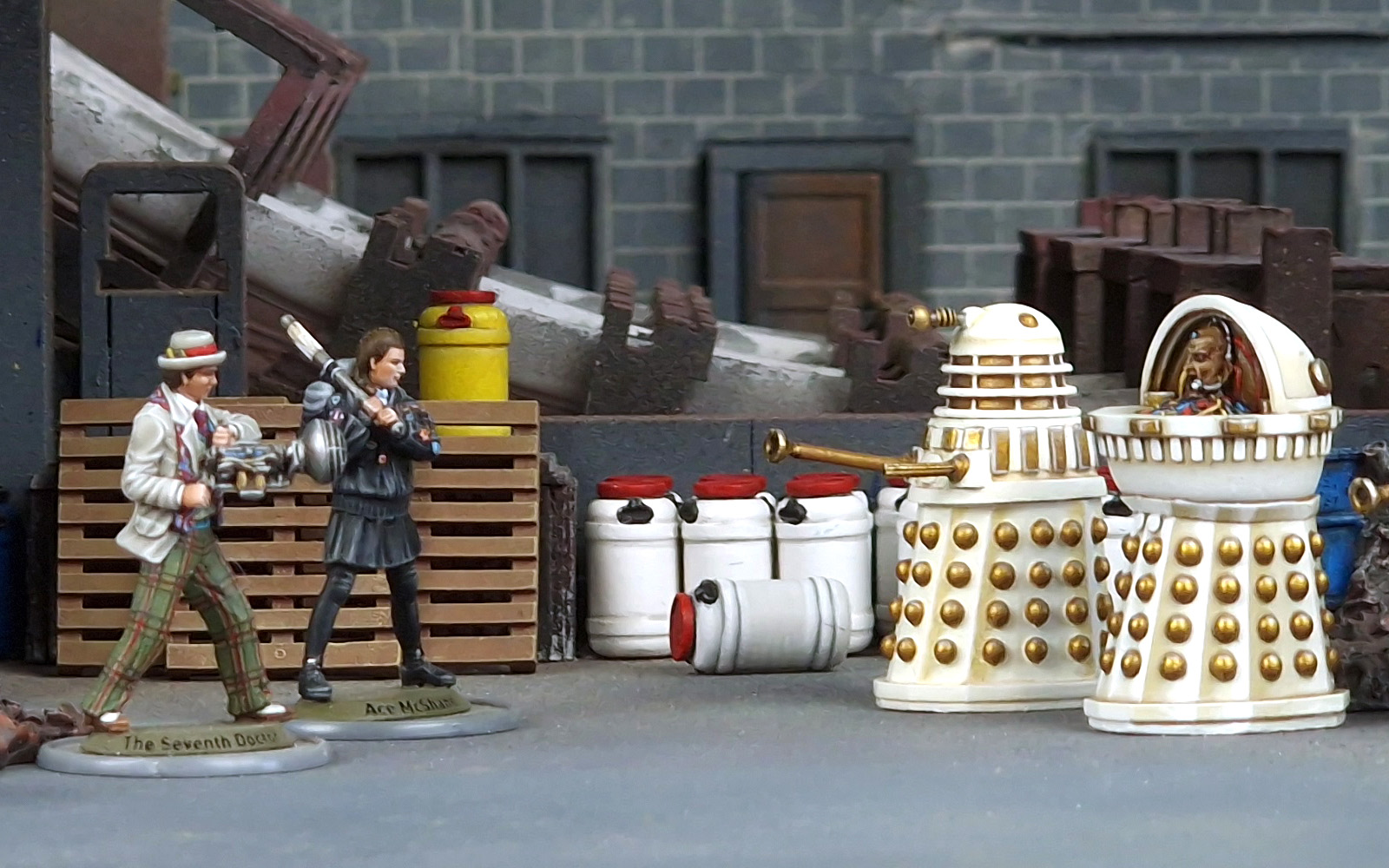 Home Doctor Who: The End of Time
DDoctor Who

Doctor Who: The End of Time

Do you want to add the Second Doctor and his companion figures to your collection or maybe you’d prefer the scaly Silurians instead? Perhaps you have a hankering for members of UNIT or characters from the classic Remembrance of the Daleks episode? If so, we’ve got you covered!

With the end of the Thirteenth Doctor’s tenure in the TARDIS imminent, we have several unreleased and exclusive sets of models which we are making available as part of our Doctor Who: The End of Time promotion – but only for a very limited time!

We are not renewing our licence with the BBC to produce our Doctor Who range of games and miniatures; this ends on December 31st 2022. The only way we are able to make all of these unreleased figures available to you is as promotional items – we are restricted from releasing them for direct sale.

So, how can you ensure you can get your hands on these truly limited-edition models? Simply spend £75.00, $100.00 or €100.00 on any products on our webstore and you will be able to add your choice of one of these limited-edition packs to your order for free. To activate this offer, simply add your chosen pack to your cart of £75.00, $100.00 or €100.00. Please note, you can only add a single pack from this collection to a qualifying order. To qualify for more than one free pack you will need to place additional orders.

As you can imagine stocks of our existing Doctor Who products are strictly available while stocks last. They won’t be available after the end of the year – don’t miss out!

View The Offer
Doctor Who Range

“When I say run, run!” Exhibiting a darker, more cunning personality than his previous incarnation, the Second Doctor hid these newfound traits to achieve his schemes most effectively, appearing, to the uninitiated, as warm and slightly clumsy; sometimes nicknamed the ‘Cosmic Hobo’.

Initially travelling with his former form’s companions, Ben Jackson and Polly Wright, the TARDIS found new companions in the form of the extremely loyal Highlander, Jamie McCrimmon and the mentally gifted Zoe Heriot.

The Second Doctor faced familiar foes during his adventures, including the Daleks and Cybermen, but also new ones like the Ice Warriors and the Great Intelligence. During one of these adventures, he first met Colonel Alistair Gordon Lethbridge-Stewart, who would go on to be promoted to brigadier and leader of UNIT, a military organisation with which the Doctor would have a long association.

Doctor Who: Night of the Doctor

After trying and failing to save a woman, Cass Fermazzi, who resents him for simply being a Time Lord, the Eighth Doctor meets his demise when the ship she is piloting crashes onto a remote planet. Restored by an elixir of life administered by the Sisterhood of Karn, the Doctor is forced to choose what man he will be regenerate into.

No longer able to ignore the ravages of the Time War, the newly regenerated Time Lord declares himself “Doctor no more.”

After the TARDIS narrowly avoids falling prey to a mysterious substance in space, it materialises in a London Underground overrun by the web-like material. It transpires that it had been produced by the robot Yeti of the Great Intelligence, one of which had been inadvertently reactivated by Professor Travers, whom they had met thirty years earlier in the Himalayas.

The Second Doctor and his companions worked alongside army forces, led by Colonel Lethbridge-Stewart (in his first Doctor Who appearance) to combat the resurgent menace, though one of their own is enslaved to the will of the Great Intelligence, hampering their every move.

Remembrance of the Daleks – Heroes

In this classic Seventh Doctor story, he and new companion Ace McShane return to where it all began, Coal Hill School, the site of the First Doctor’s inaugural TV adventure. There they discover that the Daleks are attempting to recover stolen Time Lord technology that the Doctor had left on Earth all those years before.

With the help of the Intrusion Counter-Measures Group, the Doctor must prevent his oldest foes from gaining access to Gallifreyan secrets, thus stopping them from spreading destruction through all of time and space.

Remembrance of the Daleks – Villains

The Daleks seek to recover stolen Gallifreyan technology left by the Doctor at Coal Hill school on Earth, which would give them the means to perfect their own time-travel technology and access all time and space.

Eventually revealed as the Imperial Emperor, Davros and his Imperial Daleks contended with the Doctor and his allies, as well as a renegade faction of Daleks which had rejected Davros’ right to rule. Both factions employed human agents in their manipulations, blurring the lines between friend and foe.

Also known as gold sphere Daleks, the Imperial Daleks were loyal to their creator, Davros. They were created in the aftermath of the Dalek-Movellan war, at about the time a schism wrenched the Daleks into warring factions. In 1963, the self-proclaimed Imperial Emperor led his creations to Coal Hill to secure the Hand of Omega, contending not only with their renegade foes but the intervention of the Seventh Doctor.

Somewhat confusingly, once Davros had been defeated and the Dalek Prime reclaimed governance of Skaro, these Daleks were denounced as renegades.

Also known as Earth reptiles, reptile people and Homo reptilia amongst many other colourful names, Silurians are a species native to Earth that existed long before humans came to be, living alongside the Sea Devils. The appearance of Silurians can vary wildly, with vast differences apparent in skin colour, eye shape or even their number of eyes.

In 2020, a group of Silurians were awoken by a major drilling operation. Having never been fond of the human “apes” anyway, it was misinterpreted as a deliberate attack. With hostages at risk, the Eleventh doctor was forced to broker a peace between the two races.

The United Nations Intelligence taskforce (later the Unified Intelligence Taskforce), or UNIT, was an international military organisation established to keep tabs on and combat where necessary paranormal and extra-terrestrial threats to Earth. The organisation even kept the Doctor on its payroll for a period, beginning when he was exiled on Earth during his third incarnation.

Lethbridge-Stewart, sometimes known simply as The Brigadier, was a close and trusted ally of the Doctor, acting as the commander of UNIT’s UK operations, ably supported by such men as Captain Mike Yates and Sergeant John Benton. The Brigadier’s legacy is undeniable, following his death he was succeeded in recent years by his daughter Kate Stewart.

In the 1970s, UNIT soldiers were armed with the standard issue firearm, the L1A1 SLR, a British version of the FN FAL, or Sterling Sub Machine Guns.

Like other military organisations, UNIT employs a multitude of specialist weapons. Sergeant Benton (unsuccessfully) attempted to kill the Master’s gargoyle minion, Bok using a bazooka. Mortars, meanwhile, have seen on-screen use by UNIT in the stories Day of the Daleks and Invasion of the Dinosaurs. 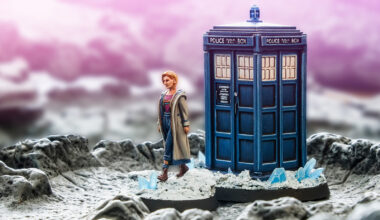 Read More
Fire up the TARDIS and uncover adventures through all time and space.
DDoctor Who 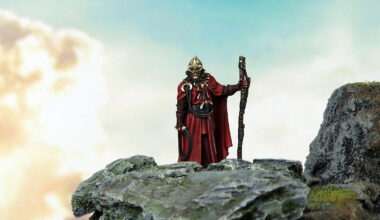 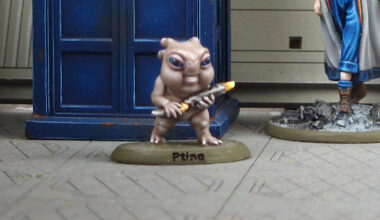 Read More
Our Webstore exclusive figure for August 2022 is this diminutive Doctor Who creature.
DDoctor Who 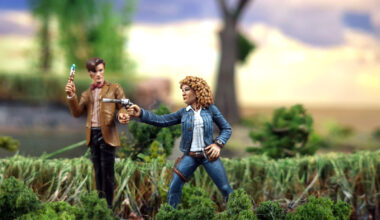 Read More
The limited-edition webstore exclusive figure for November 2022 is River Song, as she appeared in the two part Eleventh Doctor storyline, The Impossible Astronaut & Day of the Moon.