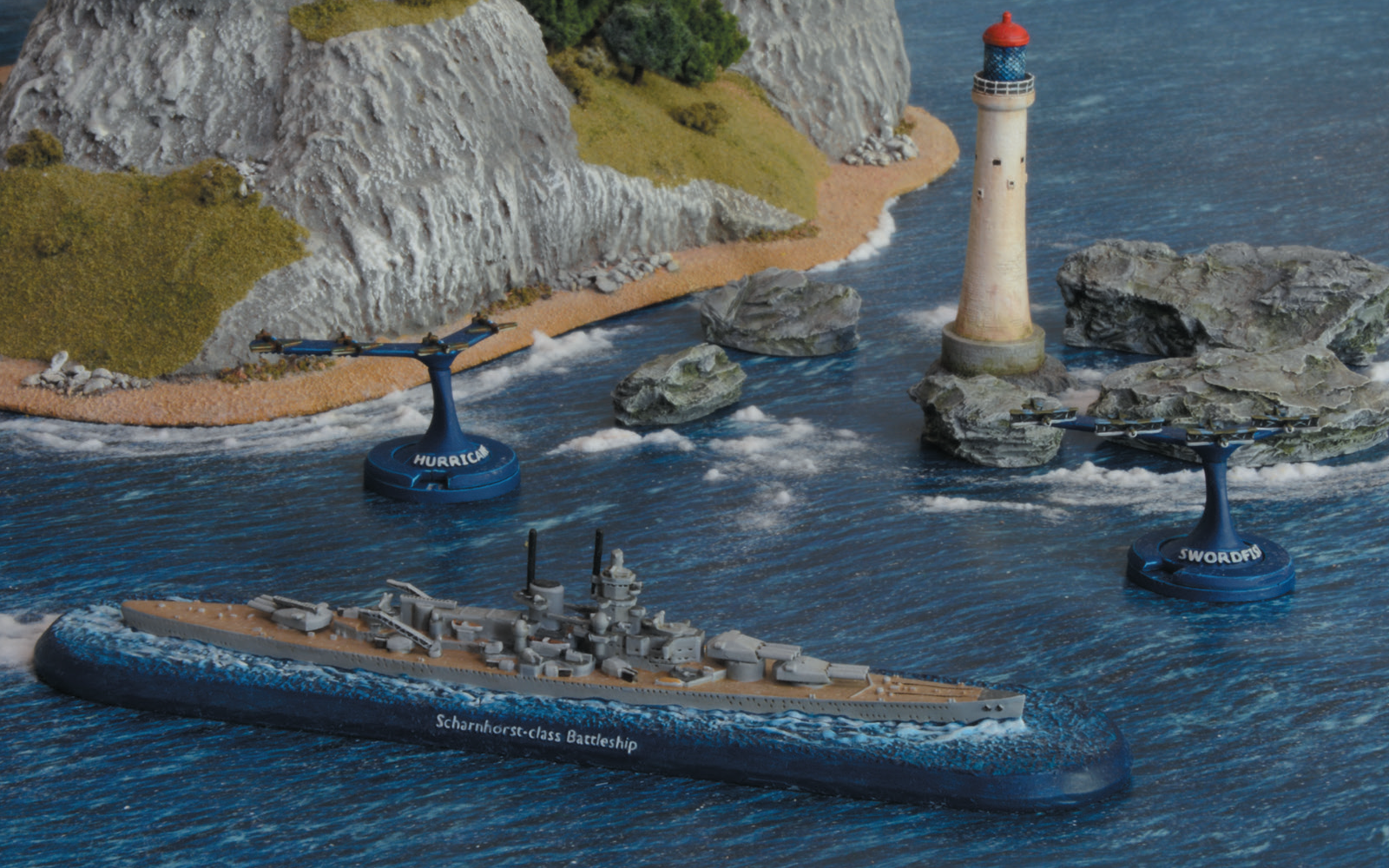 The Kriegsmarine was not a navy designed to tackle a major fleet head-on in engagements – it was primarily a commerce raiding force.

The Kriegsmarine had several powerful cruisers at its disposal, including what the British called ‘pocket battleships’ mounting heavier guns than a ship of their displacement normally would. The destroyers of the Kriegsmarine were excellent vessels, ship-for-ship they were a match for any destroyer afloat. German capital ships, such as the Scharnhorst, tied up large elements of the Royal Navy in case they took to open water and caused havoc amongst merchant convoys.

The German capital ship Scharnhorst was the lead of her two-ship class, launching in October 1936. She was armed with a main battery of nine 28cm C/34 guns in three triple turrets. Though plans were drawn up to 38cm guns, these plans were never enacted.

Throught the early war, Scharnhorst, operated in tandem with her sister ship, Gneisenau, in raiding British merchant shipping in the Atlantic. An early victory was the sinking of HMS Rawalpindiin November 1939. She subsequently participated in the invasion of Norway and sank HMS Renown, a battlecruiser, and HMS Glorious, an aircraft carrier, as well as their escort destroyers – in the course of these battle achieving one of the longest range gunfire-hits in military naval history.

In early 1943, the Scharnhorst joined the Tirpitz in Norway, hoping to interdict Allied convoys to the Soviet Union, but were intercepted by Royal Navy patrols. During the Battle of the North Cape, Scharnhorst was sunk by HMS Duke of York and her escorts.

Blücher was named for Gebhard Leberecht von Blücher, who lead the Prussians to victory at Waterloo. She was the second of the Admiral Hipper-class of heavy cruisers, completed shortly after the outbreak of World War II. She was assigned to the task force supporting the invasion of Norway in April 1940, serving as the flagship of Konteradmiral Oskar Kummetz, leading the flotilla of ships to capture Oslo, she was struck by numerous coastal defences including outdated 28cm coastal guns at close range, and two torpedoes fired from land-based batteries.

These hits resulted in a major fire breaking out aboard the vessel which spread first to the ship’s magazines, and then to her fuel bunkers, resulting in further major explosions that could not be contained. Her wreck still sits at the bottom of Oslofjord and was recently designated as a war memorial to protect it from looters.

The third of the Admiral-Hipper-class of heavy cruisers, Prinz Eugen was named for Prince Eugene of Savoy, and 18th century Austrian general. She saw action during the German operation Rheinübung of 1941, in which, along with Bismarck, she attempted to breakout into the Atlantic to sow chaos amongst merchant convoys. The two ships destroyed the British cruiser Hood and damaged HMS Prince of Wales in the Battle of Denmark Strait. Shortly after, Prinz Eugen put into France to enact repairs following engine difficulties.

Briefly deploying to Norway, she was put out of action for repairs in Germany after being struck by a torpedo from a submarine. IN the latter stages of the war, she served as artillery support for the retreating German army from the Baltic Sea. In May 1945 she was surrendered to the US Navy as a war prize, and was subjected to the nuclear tests of Operation Crossroads. Despite surviving the atomic blasts, she capsized after being towed to Kwajalein Atoll in December 1946. The wreck remains partially visible to this day.

Admiral Franz von Hipper was commander of the German battlecruiser squadron of the Battle of Jutland in 1916 and subsequently became commander-in-chief of the German high seas fleet. It was for him that Admiral Hipper was named, the lead ship of her class.

Admiral Hipper saw significant action over the course of the war, with a heavy emphasis on the Battle of the Atlantic. She also led the assault on Trondberg during Germany’s invasion of Norway, sinking the British destroyer HMS Glowworm in the process. In December of 1940, she successfully broke out to the Atlantic in an effort to disrupt Allied Merchant convoys, but failed to achieve much success. Her next sortie in February 1941 saw much more success when she sank several merchant vessels, before being transferred back to Norway to raid convoys to the Soviet Union. ON New Year’s Eve 1942, at the Battle of the Barents Sea, after sinking a destroyer and a minesweeper she was forced to withdraw due to the efforts of HMS Sheffield and HMS Jamaica. Following the failure to destroy any merchant vessels in this battle, Hitler ordered the majority of surface warships scrapped. Admiral Hipper returned to Germany and was never restored to operational status after being bombed by the Royal Air Force in May 1945.

Köln was the third of the Königsberg-class of light cruiser, operating between 1929 and 1945, initially under the Reichsmarine and subsequently the Kriegsmarine. In the 1930s she served as a training vessel for cadets, but the outbreak of World War Two saw her conducting operations in the North Sea, though she didn’t encounter any British warships at this time.

She was present at the attack of Bergen during the German invasion of Norway and was the only member of the Königsberg-class to survive the operation (codenamed Weserübung). Later, in 1942, she was experimentally modified to carry a Flettner FI 282 helicopter, and returned to Norway, though she failed to see action. Remaining there until 1945, she eventually returned to Germany only to be sunk in March by American bombers over Wilhelmshaven. However, she remained on an even keel, and with her gun turrets above the waterline, was able to provide fire support to the defenders of the city until war’s end in May 1945.

The lead ship of her class, Königsberg had a similar operational history to that of her sister ships like Köln (see above), operating as a training vessel until the outset of World War Two. She spent the early part of the war laying defensive minefields in the North Sea before participating in the invasion of Norway as part of Operation Weserübung. It was here that she met her demise, whilst attacking the city of Bergen. Here she was struck by a Norwegian coastal artillery battery, and whilst languishing in the harbour the following day was sunk by British bombers. Her wreck was raised in 1942 and broken up for scrap.

The Type 1936 was a large and very powerful design mounting 5.9-inch guns, based on the general layout of the Type 1934. The intended twin turrets were not available in time, so planned armament was reduced to single mounts in some positions. As with the preceding class, an enlarged version, designated Type 1936A, was developed from the original. The Type 1936A was more seaworthy, with much more reliable machinery. These vessels were known to the Allies as the Narvik-class.

The vessels detailed above can all be found in the Kriegsmarine Starter Box for Victory at Sea, along with four Ju-87 aircraft flights. 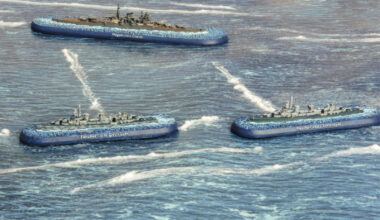 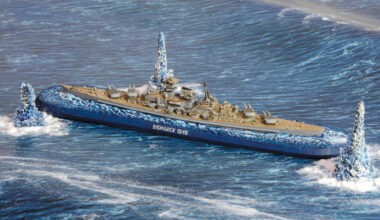 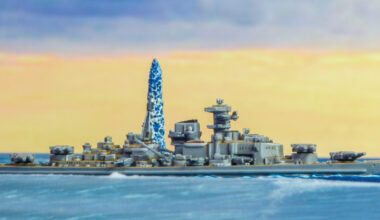 Read More
Detailing the history of each of the currently available miniatures for the French Navy in Victory at Sea...