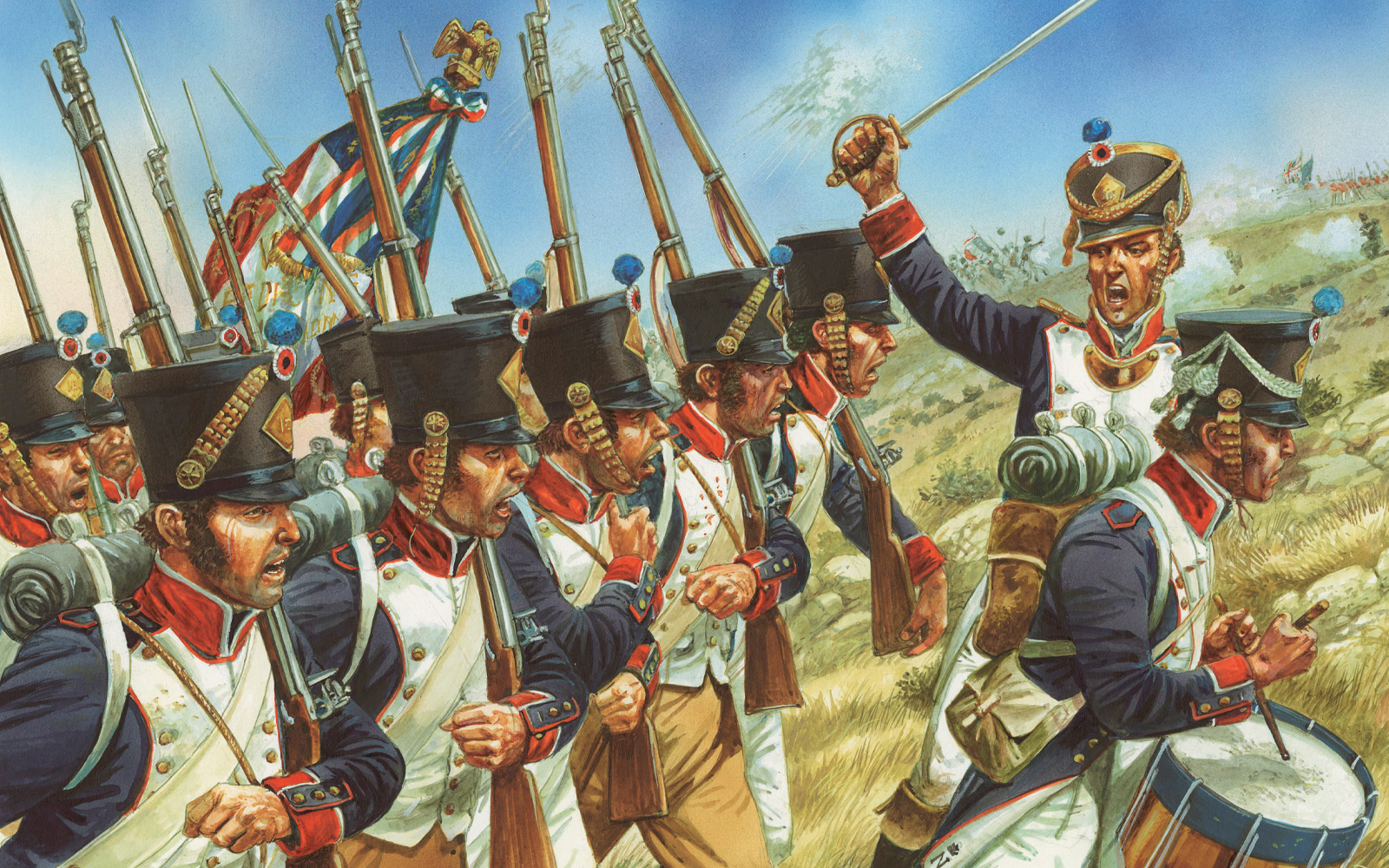 The Peninsular Campaign in Black Powder

Take a step back into one of the most revered campaigns in all military history. We’re examining the Peninsular Campaign of the Napoleonic Wars.

The Napoleonic Wars heralded a change in doctrine for Horse and Musket warfare. In prior conflicts such as the War of the Spanish Succession), many nations were confined by limited resources, manpower and logistics; forcing armies to attempt to outmanoeuvre each other in order to gain the upper hand – rather than risk the destruction of the Kingdom’s only standing army in open and decisive battle – a blow from which a nation would not recover.

Population increases in Europe through the 18th century transformed the way in which wars were fought, with armies swelling to unprecedented sizes. In the early 1790s France, under pressure from the First Coalition of England, Austria, Prussia, Spain and Sardinia decreed the Levèe en masse, meaning that the nation could count on 800,000 (largely unprofessional) men to service its field armies.

Napoleon was the first to recognise the need for strategic change. Wars now required swift decisive victories in order to avoid the logistical nightmare of servicing and supplying such vast bodies of men.

By 1807 Napoleonic France had defeated all the major powers in spectacular fashion to become the master of Europe. The French Army, with Napoleon Bonaparte at the height of his powers leading them, had extended the limits of glory and created a powerful Empire at the point of the bayonet. The Grande Armée, formed in 1802, was the mighty host that Napoleon had assembled to invade Britain, in the Pas de Calais, until his Navy was undone at Trafalgar. It had been forged from revolutionary zeal and tempered on the anvil of fourteen years of warfare; its ranks by 1805 filled with hardened veterans. It was to be the greatest army he would lead in his long career, later bringing him his tremendous victory at Austerlitz in 1805.

With the relationship between Portugal and Britain providing the perfect pretext for an invasion, Napoleon unleashed his legions. With the Portuguese king and much of the aristocracy fleeing for Brazil, the country collapsed in a matter of days.

French atrocities in occupied Spain fanned the flames of resistance and the Spanish acquitted themselves well holding their own against the French on many occasions. The victory of General Castaños on July 23rd 1808 acted as a catalyst for British Assistance – it demonstrated that the French were not an undefeatable enemy. 14,000 men under Lieutenant-General Sir Arthur Wellesley landed at Mondego Bay on 1st August 1808.

The Battle of Vimeiro (21st August 1808) was the first of the true clashes demonstrating the difference between Britsh and French combat doctrines, with the French blown away by the disciplined and steady British line. This early victory was not capitalised on, and political wrangling pulled Wellesley back to England, leaving Lieutenant-General Sir John Moore in command.

With the arrival of Napoleon himself at the head of 200,000 crack troops, Moore was forced to retreat northward, eventually evacuating from the port of La Coruna after fending off the French in a desperate rearguard action which would result in Moore’s death. With the British Army driven from the Peninsula, Napoleon’s army invaded Portugal once again, routing the Portuguese and capturing the vital port city of Oporto, along with a well-stocked arsenal and plenty of supplies. Napoleon himself, satisfied with the British defeat returned to Paris.

In April 1809, an exonerated Wellesley returned to Portugal and resumed command of all British and Portuguese forces. On the 12th of May, he defeated Marshal Soult at Oporto, a victory that allowed Wellesley to enter Spain and combine with the Spanish army under General Cuesta. The battle of Talavera on the 27th and 28th of July saw Wellesley contain a French army – under King Joseph Bonaparte and Marshal Victor – then force it from the battlefield. Yet Talavera was a costly victory, and with Soult threatening to cut Wellesley off from Portugal, he was forced to retreat. Wellesley, now Viscount Wellington of Talavera, was not followed and in the winter of 1809/1810 he concentrated on preparing a robust defensive network to protect Lisbon. Lieutenant-Colonel Sir Richard Fletcher, Royal Engineers was the overseeing expert of the construction of what became known as the Lines of Torres Vedras.

In July 1810, Marshal Massena invaded Portugal with 60,000 men, determined to smash the British once and for all. The first action at the Coa in the same month saw the British Light Division narrowly escape disaster at the hands of 20,000 French under Marshall Ney. In September, Massena was defeated after attacking Wellington in a strong position at Bussaco, but he was still able to force the British back behind the ‘Lines’. Massena soon came to realise that Wellington’s defences were unassailable, especially when factoring in the poor condition of his troops; a retreat soon followed (as well as his dismissal and replacement by Marshal Marmont).

Whilst Wellington advanced into Spain, achieving victories over Marmont, Napoleon’s invasion of Russia (detailed in A Clash of Eagles) ended in total disaster. France could no longer supply its Peninsular armies with Fresh troops whilst Wellington had no such trouble. In 1813, Wellington was once again on the offensive – achieving victory at The Battle of Vittoria.

Wellington reached the Pyrenées in July. The French counterattacked and had some success at the battle of Maya, but this was reversed by a British victory on the 28th July at Sorauren. In October, Wellington’s Peninsula veterans crossed into France and in February 1814 the British defeated Soult at Orthez. On 31st March 1814, the Allies triumphantly entered Paris and six days later Napoleon Bonaparte abdicated as Emperor of France. Fighting continued until news of Napoleon’s abdication reached Wellington, too late for the French army defeated near Toulouse. On the 17th of April Soult signed an armistice, bringing the long, bitter and hard-fought Peninsular War to an end. Huzzah for Albion!

The Peninsular War in Black Powder 2

The Lion and the Cockerel

The Peninsular Campaign covering of the Napoleonic Wars is considered by many to be one of the greatest periods of all military history, not least by the author of our Black Powder supplement, Albion Triumphant Volume 1. As the title suggests, this tome focuses mainly on the superpowers of the 19th Century, Britain and France. Although other nations were involved (and are covered in places of overlap), The Lion and The Cockerel were the super-powers of the early 19th Century it is only fitting that these two be the focus. Napoleonic armies fought differently to prior armies; with the French being particularly ill-equipped to supply its forces in a protracted conflict.

Volume One covers the Peninsular Wars between 1806 and 1814, including army lists and profiles for all the major participants. A separate volume focuses on the Hundred Days Campaign and Waterloo.

In battle the British usually fought on the defensive, Wellington took great care to shelter his lads out of sight of the enemy on the reverse slope of a ridge with secure flanks. He would line the crest with his artillery and throw out large numbers of skirmishes onto the forward slope to contest the French, advancing to the pas de charge drum beat, or ‘Old Trousers’ as the British called it. The enemy, unsure as to the whereabouts of Wellington’s main force, more often than not blundered into British lines without being in the correct formation for the tactical situation. They would then be thrown into confusion by close-range volleys whilst trying to deploy, then a loud cheer would signal a controlled bayonet charge that would sweep away the disordered French.

Napoleon had boasted that he could afford to lose 30,000 men a month, but he could not replace the sapping loss of experience. This manifested itself mainly in the infantry, who were now not as manoeuvrable as they once had been. Napoleon in all his campaigns had always searched for the decisive battle that would win the war with a single stroke. As his infantry became ever increasingly less skilled in battlefield drill the reliance on fast-moving assault columns, driven on by the pas de charge, became more emphasized. Attacking in column would force results quickly on the field, especially if supported by massive artillery preparation, and to this end Bonaparte would add more and more heavy guns as time went by. 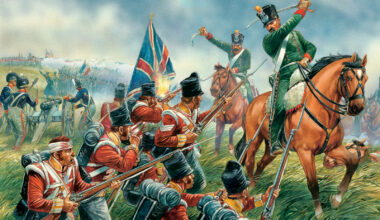 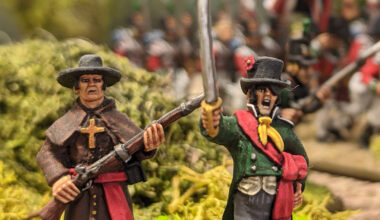 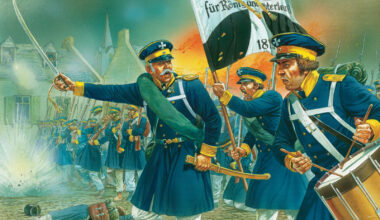 Read More
A brief guide to our range of Napoleonic Prussians - Resplendent on a Black Powder Battlefield!
NNapoleonic Spanish 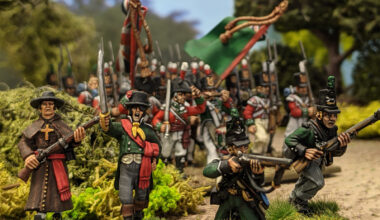 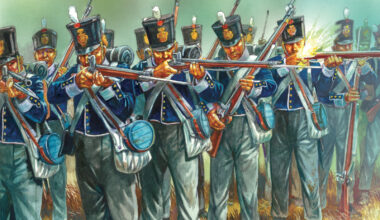 Read More
Dutch and Belgian troops in miniature have received their marching orders and shall soon be arriving on Black Powder battlefields.
NNapoleonic British 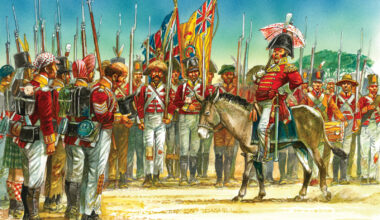