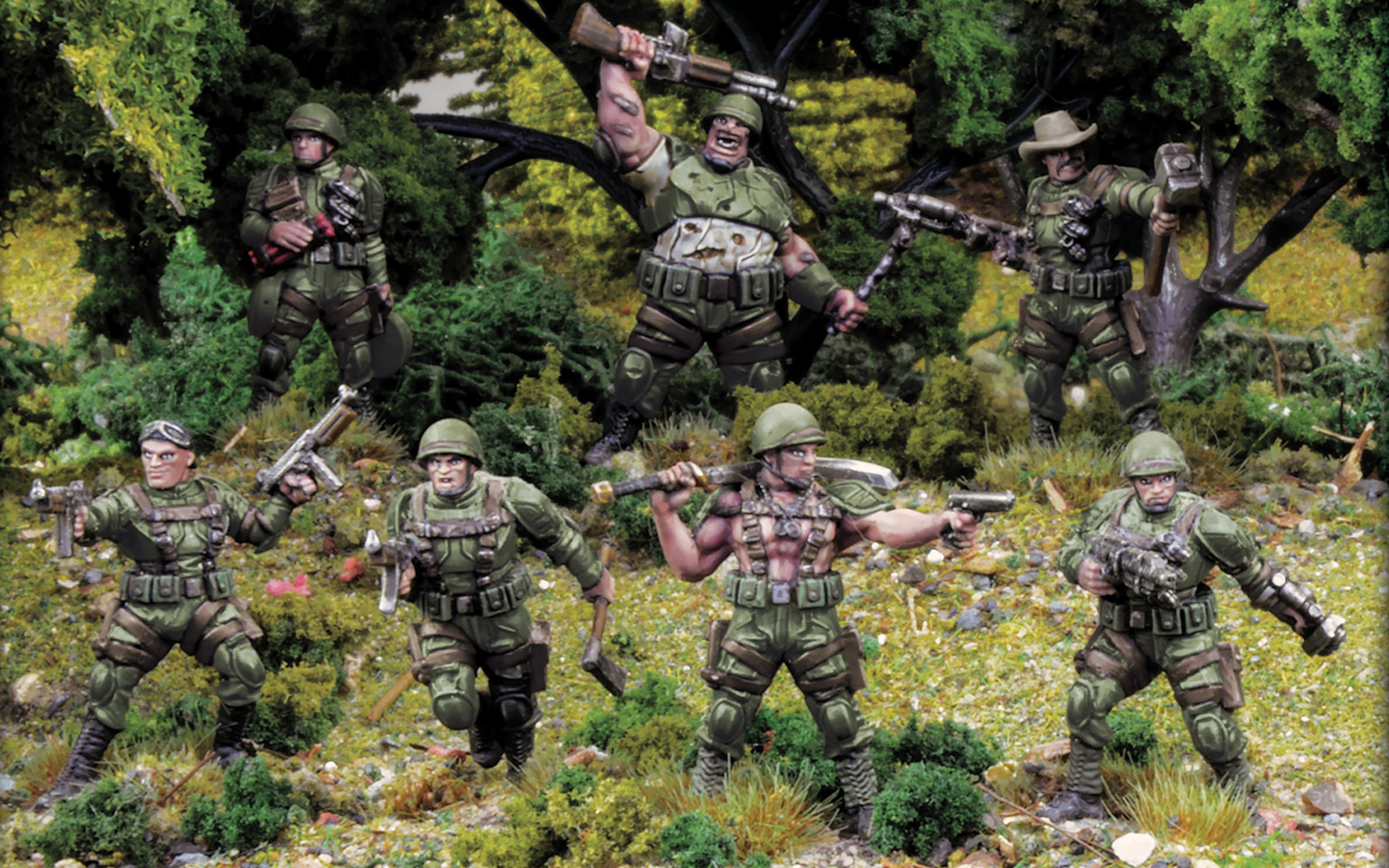 Konflikt ’47: The US Paragon Programme

The Los Alamos test site hides the inner workings of the US Paragon Program. Enter at your own risk!

The US Paragon programme is a highly secret application of Rift-tech science that looks to enhance human genetics and biology at a molecular level. Based out of a highly classified and very heavily guarded US Army training facility in the Nevada Desert, the Paragon programme has made significant advances in enhanced genetic manipulation and muscular intensive development. The results are already influencing the battlefield and the US Paragon soldiers are at the forefront of the fight against the monstrosities of the German’s equivalent super-soldier programme.

With almost three years of experience and data, the Paragon Programme is gradually increasing its success rate, which was a problematic issue during its development and early trials. Looking back, the successes of the first experiments were few and far between, but those soldiers that the programme produced were essential to the war effort and many have become household names in the US. No one exemplifies this more than Captain Slammer Samuels, one of the most successful Paragons to emerge from the very beginnings of the programme, and a public hero at home due to his exploits on the battlefield being broadcast and glorified in the US Army’s newsreels.

Samuels has proven to be an anomaly to some extent, with his enhanced physique, stamina and performance proving difficult to replicate. However, many other subjects have been enhanced to nearly as great a level, and like Samuels, these Paragons are often immortalised in the newsreels and even comic books in the US.  Not all subjects achieve the same results, the failure rate of the programme remains high and many volunteers are found to be genetically unsuitable or fail to respond to the rigorous training regime and experimental chemicals used to boost their metabolisms.

Volunteers for the programme come from across every Arm and Service of the US military, but unsurprisingly a large majority come from Ranger, Marine and Airborne formations. With a success rate of around 5%, large numbers of volunteers are released from the programme at various stages, but to avoid wasting the significant investment in training, most are offered a place in the more recently formed Paragon Support Units that have been specifically developed to capitalise on these unsuccessful applicants. Training for these units is extreme and many still fail to make the grade, but the number of volunteers from outside of the Paragon programme continues to exceed the capacity of the training facilities. The Paragon Support Units (PSU) therefore contain a combination of regular US servicemen, and former participants of the programme and are led by a fully-fledged Paragon NCO with combat experience. The units operate closely with the elite Paragons and provide fire support, perimeter defence and extraction forces for Paragon Commando Teams, as well as being able to carry out missions in their own right.

On the battlefield, the Paragon Teams carry out the most dangerous or specialised missions, supported by the PSUs or the regular army. They form dedicated task forces for tough and often high-risk missions. In northern Europe, these teams often specialise in hunting their German DNA-enhanced counterparts – the horrors of the Nachtjäger and Nachtalben scouts. In the Pacific, the stamina and toughness of the Paragons make them ideal for long-range reconnaissance missions or patrols behind enemy lines on remote islands or locations. Regardless of their role, there are never enough Paragons to go around and every formation commander is desperate for their assistance. Command and control of the Paragon Service sits with an autonomous Army Headquarters attached to the Office of Strategic Services (OSS). Although any assistance the Paragon Service provides to OSS covert activities is tightly classified, captured Soviet intelligence reports describe Paragon soldiers operating alongside partisans in the Balkans, which would suggest that some combined operations are likely. Within the OSS, the Paragon Service still answers to the Joint Chiefs of Staff, but the more streamlined chain of command allows the Service to avoid much of the Army bureaucracy and ensure the Paragon Service has the agility to be deployed where and when needed.

As a result, Paragon Taskforces are effectively semi-autonomous in the field and are rarely found in greater than platoon strength, although it is feasible that an entire PSU Company could be pulled together if required. Collectively, all elements of the Paragon Service have access to the best equipment and weapons available, including experimental or new rift-technology. Most units rely on tried and trusted weaponry, but the new Heavy Tesla Rifle and M3A2 Grenade Launchers are regularly taken by the PSU squads for additional firepower. It is also not unknown for units to use foreign weapons for missions behind enemy lines, making the acquisition of ammunition easier during extended operations.

The Paragon Teams and Paragon Support Units are a new and essential cog in the American war machine ideally equipped to counter enemy super-soldier threats and to spearhead commando and covert operations. The lack of size of the Paragon Service is offset by the unique skills and abilities of its soldiers, and as the War continues the Service will only get bigger, stronger and better.

In Konflikt ’47, Paragons can be fielded in a variety of ways. Firstly via the eponymous Paragon Squad (Konflikt ’47 Resurgence supplement – Page 44), composed of three Veteran infantrymen that come with the Fast, Tough and Immune to Horror special rules, making them a hardy enough prospect to deal with, before you begin to customise the squad. You’ll have the option to choose from any of the six named characters to form your three-man squad. Not only does each character harbour its own particular set of skills, but they also confer special rules to the unit as a whole – allowing you to tailor your paragons for the task at hand. Want a specialist close combat unit with the Tough Fighter, Fanatic & Stubborn special rules? No problem (and one of your models will be wielding a sword which is always cool)!

Our Paragon squad contains miniatures to represent all the distinct personalities the unit entry allows for, plus a model to represent Slammer Samuels, whose rules you’ll also find within Resurgence.

These miniatures are also suitable to act as NCOs for Paragon Support Units (Konflikt ’47 Defiance supplement – page 50). These Veteran units are highly versatile and can be equipped with the likes of the Heavy Tesla Rifle and grenade launchers amongst the more conventional SMGs and BARs. Each PSU is led by a Paragon NCO – as per the main Paragon squads you have a choice of which model – with each conferring the unit as a whole a specific additional skill.

PSUs also have the First to the fight special rule, enabling the unit to make a Run move after being set up allowing you to seize the initiative and grab an early game positional advantage. You can even make a singular PSU unit in your army Elite, meaning it can potentially activate more than once a turn. Though costly, such a unit represents an enormous threat to an opponent, not least because if its Order die is going back in the draw bag, it’s less likely your opponent will see their own dice drawn at a crucial moment.

To represent your PSU units on the table, it’s really up to you. US Army infantry, US Airborne and US Rangers are all appropriate or use a mix of all three for a prime kitbashing challenge.

Get Started With Konflikt ’47 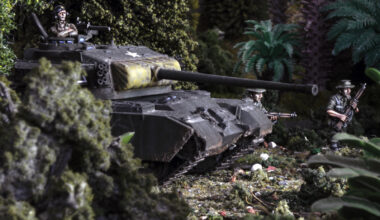 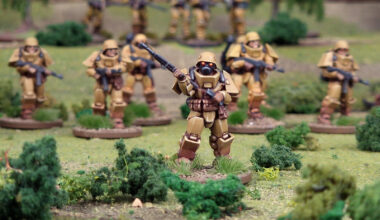 Read More
The limited-edition figure for February 2023 is a new sculpt for Konflikt '47!
KKonflikt '47 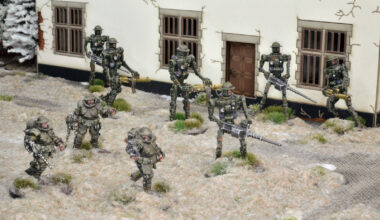 Read More
Announcing the acquisition of the IP from Clockwork Goblin.
KKonflikt '47 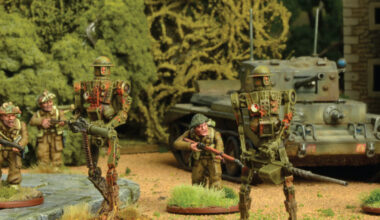 Read More
Your Bolt Action army can also serve as the basis of a Konflikt '47 force.
WWorld of Warlord 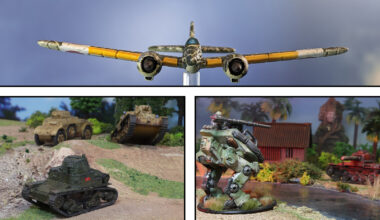 Read More
The German forces of 1947 had access to some of the best rift-tech available, particularly in the field of DNA-enhanced infantry.