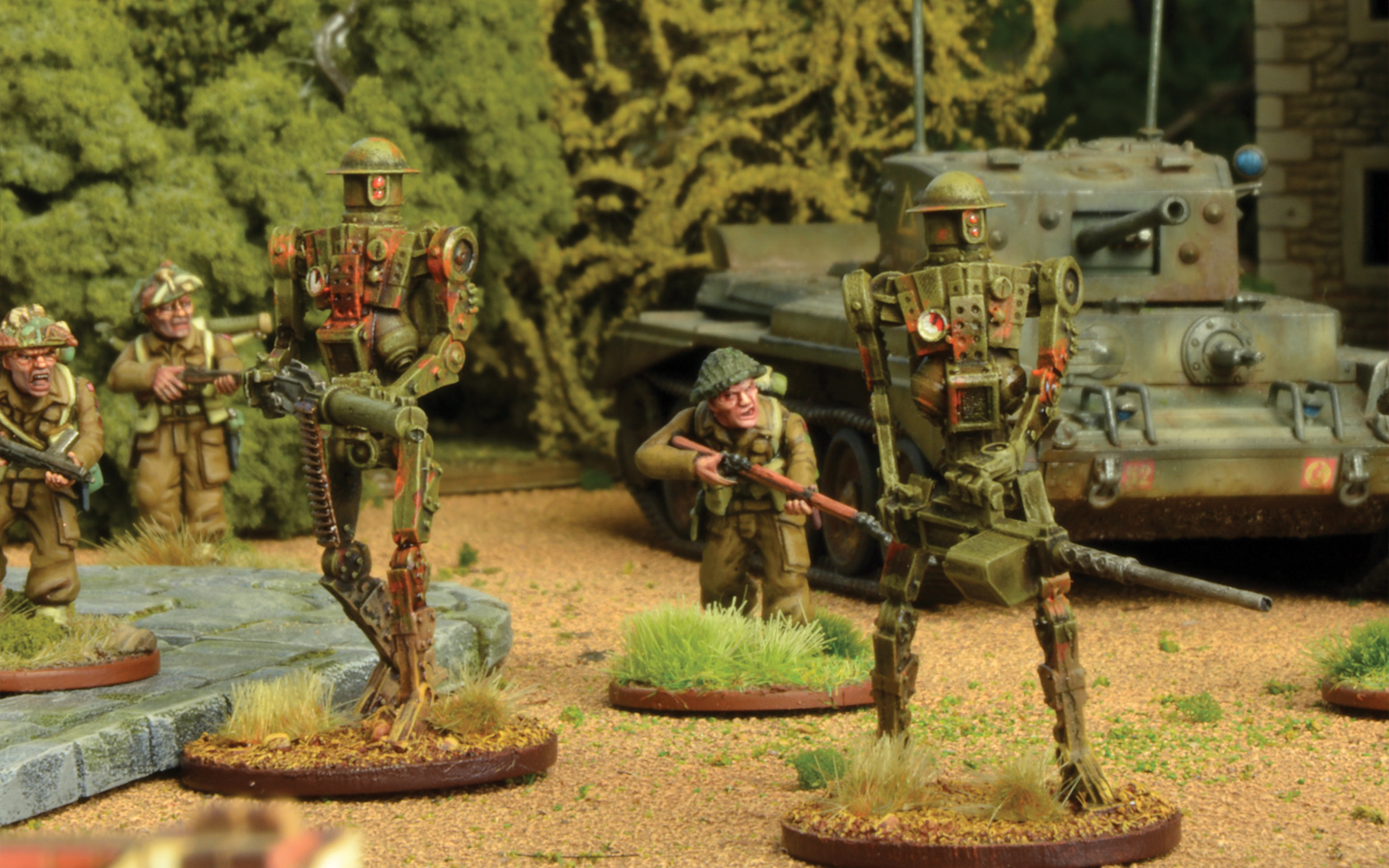 Home Getting the Most from Konflikt ’47 Starter Armies
KKonflikt '47

Getting the Most from Konflikt ’47 Starter Armies

Chris Hale suggests some army lists that can be made from the contents of the Konflikt ’47 Starter Boxes.

We regularly get questions on how best to build the contents of the various national starter boxes for Konflikt ’47. Whilst there is plenty of room for debate on the ‘best’ way of building a force from these models, it seems to us that it would be useful to present some suggested starting forces to allow new players to get started with a workable core force to develop how they see fit. Whilst some of the starter boxes can be built to a 1000 or more points, a couple struggle to get that high, therefore we have chosen to build 850 point forces which are more than enough to play a good game and can be expanded easily. With some of the starter sets, simply upgrading troops and vehicles from regular to veteran will quickly take the points to 900, 950 or even more.

What is Konflikt ’47 Exactly

Konflikt ’47 is set in a world very much like ours; in fact, until the middle years of World War II, its history is nearly indistinguishable from our own. However, in 1943 the order of the world changed with the development of atomic weapons. The testing and use of these weapons set in motion a chain of events that would forever change the nature of the conflict and directly lead to a new style of warfare.

Whilst testing nuclear weaponry, the US produced a side effect that changed history forever. At the test site, a Rift in the fabric of space formed in the heart of the testing facility. Before the Rift was understood, the US continued their testing and eventually developed nuclear weaponry, one of which they dropped on Dresden inadvertently creating another Rift, which the German scientists then started to examine. Thus began a race of trying to understand the properties of the Rift and how to apply them to win the war.

The Konflikt ’47 rulebook is a stand-alone rule set designed using the Bolt Action World War II tabletop wargame. It contains all the rules, background and forces needed to play an alternate history or science fiction wargame set in 1947 using a fictional variation of history.

In terms of tabletop, you can actually play Konflikt ’47 with just your Bolt Action figures and ignore fielding all the new weird and wonderful stuff, but this would inherently put you at a disadvantage. Konflikt opens up a whole new world with new army compositions and battle challenges! Let a Soviet Ursine go beserk amongst some infantrymen, or have a Tesla cannon shred through a field full of Totenkorps (undead soldiers!) or even have some of your infantry almost impervious to small arms fire, becoming super soldiers.

The best approach to get into Konflikt’47 is to find your army of choice a pick up a starter set. Each is focused on a specific army and provides the basic requirements for any force plus the rules.

This starter box provides a small but very well-equipped force. Having less Order Dice than your opponent is a possibility, but each element of the force can hold its own. The Spinne can threaten light and even medium vehicles or heavy infantry, whilst the Panzer-IV X will terrorise enemy armour. Although this set lacks large amounts of infantry, the quality and equipment of the basic squads is considerable. Finally, the Totenkorps provide a small distraction and nuisance to the enemy, but they’ll be even more effective when the squad size is expanded.

This starter box provides a small force but with plenty of firepower thanks to the Automated Infantry and their medium machine guns. The list generates a reasonable amount of order dice and that can fire a lot of rounds at the enemy (especially with the Rapid Fire national rule). The Cromwell-T can handle enemy armour or infantry due to its versatile tesla cannon. The Guardian light walker can pressurise infantry and even give armour some concerns if it can close to close assault.

This starter box comes with a mass of infantry, but you’ll need them thanks to the free inexperienced squad Soviets get. The large amount of infantry provides considerable firepower, and the T-34 ZP can supress enemy infantry and armour to gain the initiative. Anti-tank weaponry is limited to the Cossack’s main armament and the heavy infantry’s AT rifles, but a couple of AT rifle teams can also deter enemy armour.

The US starter box provides a compact veteran-heavy force which is a little light on manpower but carries fair firepower and the ability to tackle any opponent. The two infantry sections are a little small but with the BAR automatic rifles and the US national rules, can put down fire and keep moving. The heavy infantry have reasonable firepower once they close to assault rifle range and the Sherman-T can handle armour and infantry with ease. The Coyote light walker can tackle enemy infantry and even armour when it gets to close assault range.

The Japanese starter box provides a versatile and agile force with the fearsome scorpion light walker a threat to infantry and armour, a reliable if basic medium tank and two good sized infantry squads. The fast battleframe infantry can work on the flanks with the scorpion and a sniper can target enemy officers, NCOs or weapon teams. This is the only starter set with a mortar, all be it a light one, but tis poses a threat to static targets like snipers and can also be used to deliver smoke to support the force.