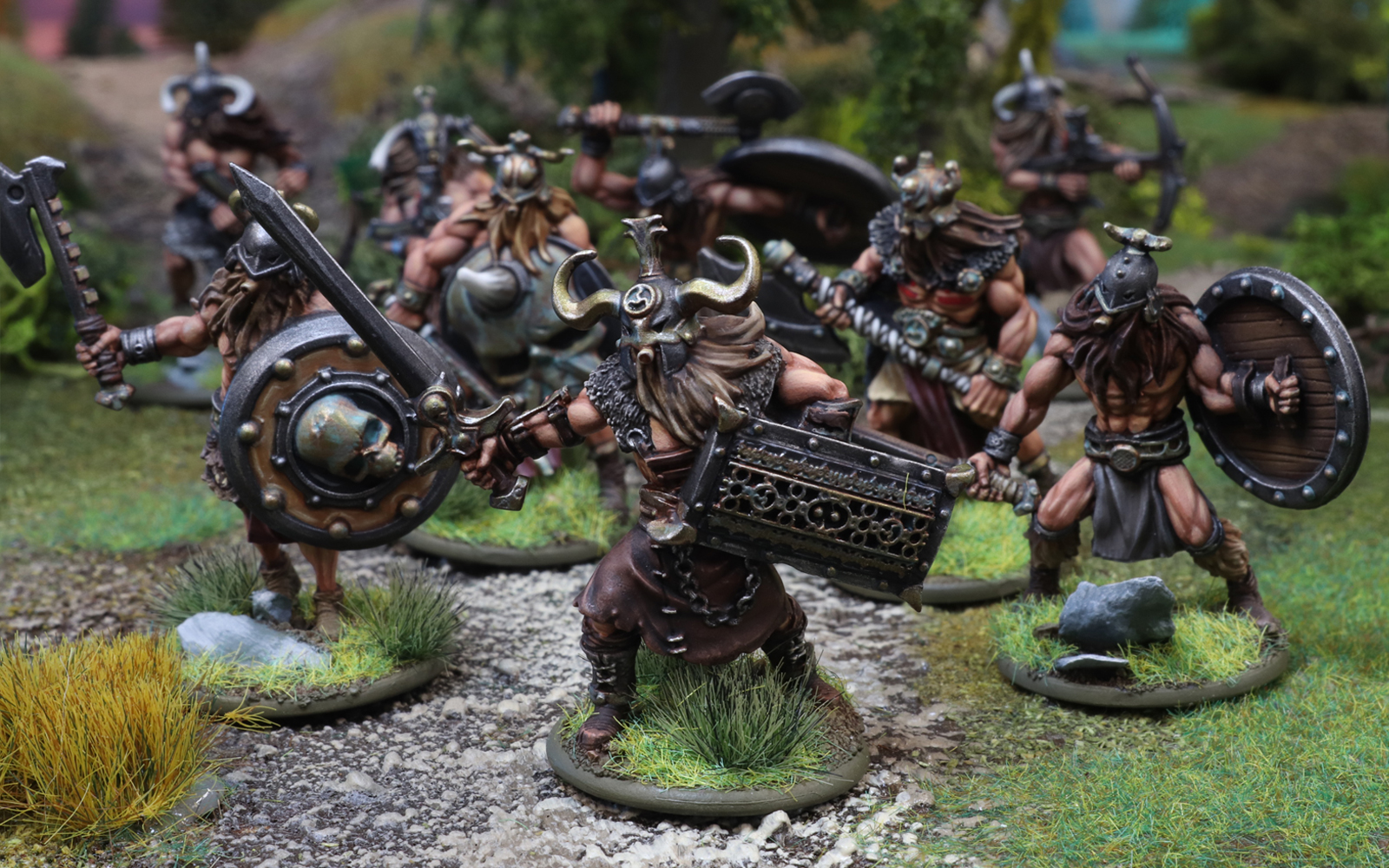 Devotees of the cosmic Crom Cruach, the Drunes crave destruction and pestilence.

A darkness that continues to plague Tir Nan Og, the Drunes are a mystical sect devoted to Crom Cruach, a cosmic being bent on devouring the world. As worshippers of this interdimensional deity, the cult of the Drunes is one focused on destruction and pestilence. So dedicated are the Drunes to Crom Cruach that they have flayed the skin from their bodies and have surrendered their corporeal forms to the ravages of decay.

The stench of their cadaverous masters forces their soldiers, the Skull Swords, to use breathing pipes and wear masks of matted hair; this simultaneously dehumanises them whilst giving them their distinctive appearance.

Measure for measure, Skull Sword Champions are amongst the best models in the Sláine range. With a Notoriety of 12 they are on par with the deadly Fomorian Champions and characters such as Morgan Axehead, King Gann, King Rudraige, Medb the Sorceress and even Slough Throt. Furthermore, their Drune Champion skill also allows players to draw two Feat cards for each Skull Sword Champion in their warband.

All Skull Sword Champions are equipped with a hand-weapon and shield as standard. Models using the shield gain the Defender attribute; this allows those models to consider [Special] results rolled in melee as a further [Shield].

Each Skull Sword Champions can exchange their hand weapon and shield for a great axe for free. As the name would suggest, the great axe is a heavy and deadly weapon; it imbues a +1 Power bonus to the equipped model. However, as a double-handed weapon it cannot be used by a model carrying a shield. It is also Slow; this grants +1 to Evade to any model attempting to dodge a blow from this weapon.

The foot soldiers of the Drunes, Skull Swords are little more than well-equipped thugs. Like their masters they wear masks of coarse hair and breath through pipes.

With a Move of 5 and an Evade of 0, Drune Skull Swords are on par with Fomorian Sea Demons but slower and easier to hit than both the Earth Tribe Warriors and the warriors of the Sessair Red Branch. Their stats are otherwise decidedly average; this is reflected in their Notoriety of 10 for a group of three, which is the same as the equally unexceptional Earth Tribe Warriors. Their Fight of 2 is typical of the ‘grunt’ models in Sláine, as is their ability to fight as a unit thanks to their Group skill; it is when using this skill that the Drune come into their own, combining as they do to make a single attack with a very respectable Fight of 6.

Whilst the repeating crossbow’s Range of 12” is eclipsed by weapons such as the long bow and recurve bow (24” and 18” respectively), its +1 Shoot modifier makes it the most accurate ranged weapon in the game. Its Power of [3] also makes it one of the most powerful.

The Skull Swords are led by a trio of noteworthy characters, including the putrescent Lord Weird himself, Slough Feg. He is accompanied by his favoured lieutenant, Medb. This warrior-witch can be brought to the field using either the Medb miniature, or in her guise as King Ragall’s duplicitous queen, Megrim. Lastly, the box also includes Medb’s devoted—and diminutive—bodyguard, Robym

Insane yet powerful, the Lord Weird Slough Feg is a rotten, cadaverous sorcerer. As the supreme Drune Feg has seen his plans continually thwarted by Sláine. Frustrated by these reversals, he has taken to leading the Skull Swords in person. Having eaten an egg of the Time Worm, he has gained immortality and knows full well that, even if he is struck down in the field of battle, he will return anew to torment Tir Nan Og.

As with all ‘Heroes’ in Sláine, Slough Feg has an impressive Cool of 5, ensuring he adds a valuable Star chip to the draw. There’s also an excellent chance that, if activated using that Star chip, he will be able to return it to the draw once he’s completed his activation. For this reason, players facing Slough Feg should be prepared to see the cadaver activating multiple times per round!

Not only do Slough Feg’s Shoot and Fight of 4 make him one of the very best warriors in Tir Nan Og, but he also enjoys a slew of skills. Sour Magic Practioner allows players to draw three Sour Magic cards and keep two whilst Hero of Crom Cruach also lets players draw and retain two random Feat cards. In keeping with his decaying visage and emaciated, rotten body, his Terrifying skill forces can force opposing models to move out of Slough Feg’s way as he moves about the board; this is particularly potent when players wish to open up charge lanes or lines-of-sight for Feg. Lastly, he is always issued with the Deathless feat card.

Slough Feg carries a macabre sickle in combat. Built from the remains of fallen enemies, this sickle inflicts a Hex on anybody it wounds.

Models wounded by a Hex weapon are issued with a randomly drawn, face-down Hex marker. When the Hexed model next moves, the Hex marker is turned over to reveal its numerical value; this value is then deducted from the distance the model may move.

In one of his earliest adventures, Sláine thwarted Medb’s ambition to become one of Slough Feg’s immortal brides. Vowing to have her revenge on Sláine, she joined the forces of the Lord Weird. Under his direction—and disguised by a mystical glamour—she assumed the role of Megrim and drove the weak-willed King Ragall to surrender his lands to the Fomorians. Her further machinations were continually undone by Sláine and they remain locked in enmity.

Medb’s stats and Notoriety are on par with key characters such as Nest, King Rudraige, King Gann and Mongan Axehead, but the skills Sorceress and Glamour set her apart. The former allows her to draw three Sour Magic cards and retain two, and the latter allows players give Medb the Glamour Feat card at the beginning of a game.

Medb’s loyal servant, Robym is utterly devoted to protecting her.

Whilst Robym is somewhat lacking in martial prowess, his Resist of 4 makes him remarkably resilient. His Loyal to Medb skill also allows him to swap places with Medb is they are within 3” of one another and she is engaged in combat; it also lets Medb transfer one Injury or Stunned marker from herself and onto Robym once per game.

Fortunately, Robyn’s Stubborn skill ensures his Stats are unaffected by the first Injury marker he receives. He may not, however, perform any Double actions other than Charge or Recover.

Robym is armed with two weapons. Whilst these weapons are not particularly noteworthy, they do, as with the Skull Sword Champion’s weapon and shield, afford him the Defender skill.

Get started with the Sláine Miniatures Game and lead your Skull Swords to victory in the name of Crom Cruach on the tabletop. Our Drune Warband starter bundle contains the Kiss my Axe! Starter Set – which already contains Slough Throt, Weirdstone and Skull Swords – and adds both the Drune Warband and Heroes sets providing every option with which to subjugate the peoples of Tir Nan Og.

More Warriors and heroes are coming soon for the Sláine Miniatures Game – some of which may be of particular interest to Drune players… Watch this space! 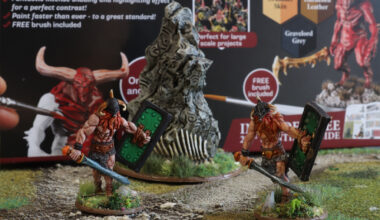 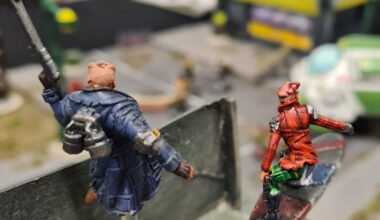 Read More
Take a peek into the wretched depths of the megalopolis. We’re looking at the crazed and sometimes bored individuals who stir up violence in MC-1.
SSláine Miniatures Game 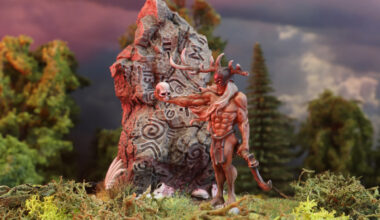