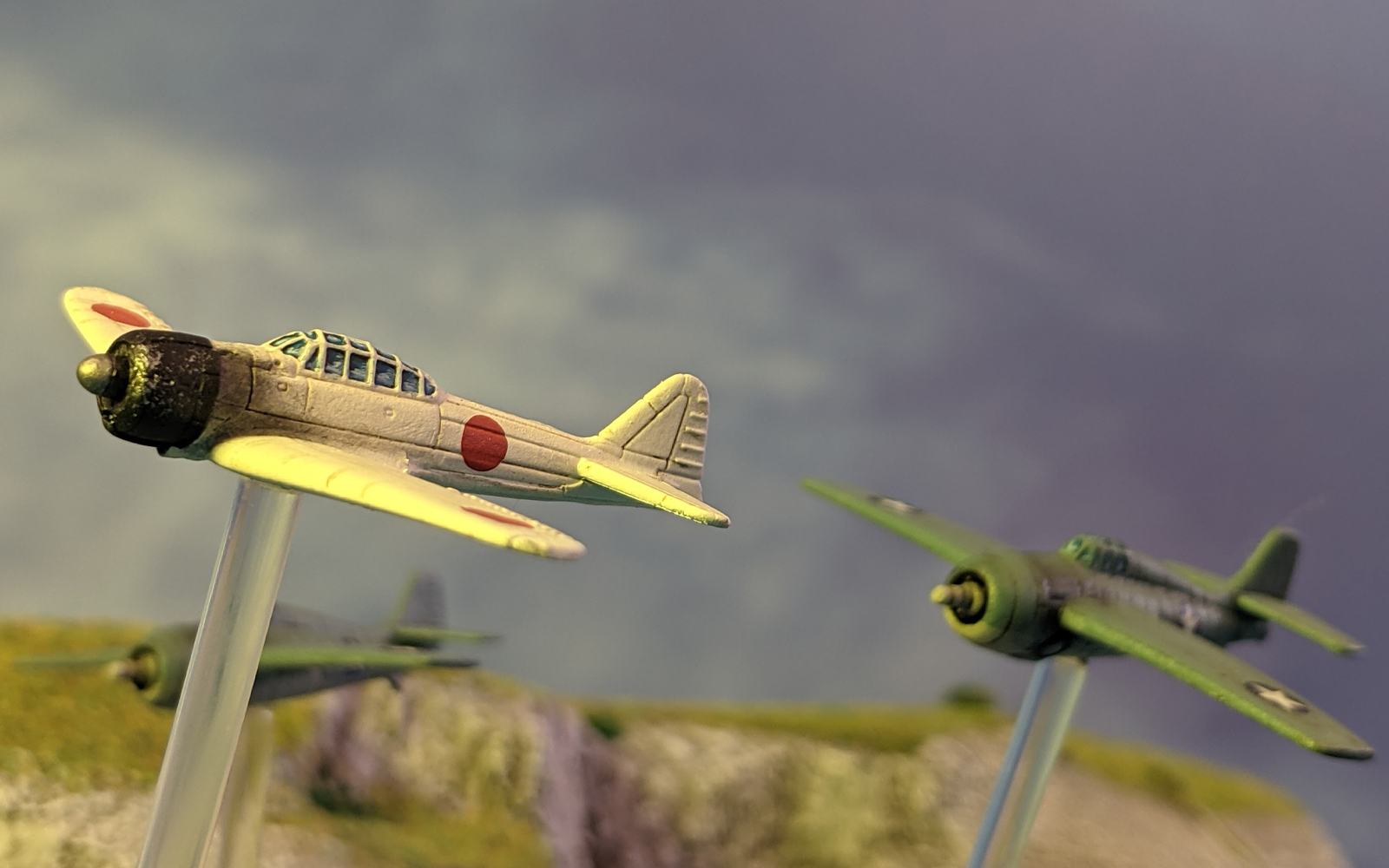 In the Pacific, carrier-based planes mastered the battleship and changed the face of naval warfare forever…

The evolving nature of naval warfare gave more and more prominence to the carrier, and the control of island airfields were of paramount importance to the greater strategic concerns of the Pacific theatre. The air war over the Pacific, therefore, provides a fascinating focus for the tabletop gamer, and there was no battle more crucial than Midway, on which our brand-new Blood Red Skies Starter Set centers.

What is Blood Red Skies?

A force is comprised of iconic World War 2 fighter aircraft using the dynamic ‘Advantage’ system. Opposing pilots can also use card-based aircraft traits, doctrines, Ace skills and theatre rules to make the most of their planes and fighting environment.

Whilst games of Blood Red Skies can be as simple as matched dogfights, the strength of the game is in the variety of scenarios available. Each player often has asymmetric objectives as attacker or defender in missions such as ground attack/defence, bomber or transport escorts or even simple daring reconnaissance flights over hostile territory.

The Advantage Mechanic: The core mechanic of Blood Red Skies lies in the use of a specially designed flying base that can be set at three different levels of “Advantage” to represent aircraft status during their manoeuvres:

Broadly speaking, Advantage represents differences in height – high, medium, low – but can also represent a fighterʼs “energy state.” That means their ability to make rapid manoeuvres and control the fight.

Every Ace pilot knows that ʻAdvantageʼ is vital in air combat. To show this in Blood Red Skies, fighters can manoeuvre to place enemy aircraft at a Disadvantage, or climb to gain Advantage. Advantage determines the turn sequence (Advantaged planes go first). Advantage can also be “burned” to gain increased movement and turning options when an aircraft moves. Most importantly, only Disadvantaged planes are vulnerable to being shot down.

The Battle of Midway

Early in the war, it had become obvious that the capability of agile fighter-bomber and fighter-torpedo bomber aircraft against surface targets was so great that the concept of air superiority had become paramount. This was especially true for maritime targets. The destructive power that could be brought from the air was such that it could overwhelm a numerically superior surface force and thus achieve ‘surface superiority’.

Carriers, therefore, had emerged as the equal of the battleship in terms of power. Japanese commanders hoped to capitalise on this, by using their advantage in number of carriers available. Their plan was to attack Midway Island, which could be used as a base of operations against Pearl Harbor. The US Navy had to fight for Midway or accept a worsened strategic situation if it were lost.

The Imperial Japanese Navy struck first, inflicting damage on the base at Midway but this did not prevent its aircraft contributing to the battle. US aircraft found the Japanese fleet in a somewhat disorganised manner, though at first suffered heavy losses to no effect. However, the very confusion that weakened the initial attack drew the Japanese defensive fighters out of position and allowed later strikes to press home.

Although the USS Yorktown was crippled by the counterstroke (and later sunk by a submarine) and 150 American aircraft were lost, the Imperial Japanese Navy lost four fleet carriers and – more importantly – the cream of its naval aviators. This defeat had enormous strategic consequences; the dominance of the Pacific theatre by the Japanese navy was ended and thereafter the strategic initiative shifted to the Allies.

This battle definitely proved that carrier-borne aircraft were no longer supporting elements for surface forces, but rather the primary instruments of attack. This can be demonstrated by the sinking of the mighty Yamato by US aircraft in April 1945.

Unlike the British, Germans and Soviets, the United States did not have a separate air force. Instead, aerial combat was handled by the doughty pilots of the US Army Air Force and the US Navy. Both branches would see some of the most intense fighting of the war, both in the European and Pacific theatres. By the end of the war, the Army Air Force had become virtually independent from its parent organisation and became the US Air Force in 1947.

Before the surprise attack by Japanese naval aviation at Pearl Harbour in the winter of 1941, the US Navy had 8 carriers, 4,500 pilots and 3,400 planes. With this formidable fighting force, it would chase the Japanese back and forth across the Pacific ocean, skirmishing over uninhabited atolls and vast tracts of the open ocean. While the US Navy had a numerical advantage, the sluggish F4F Wildcat proved to be inferior to the lightning-fast A6M Zero.

In 1945, the nascent US Air Force and its Navy counterpart were one of the largest air forces in the world, supported by an industrial giant of peerless capacity. US Army Air Force bombers would deliver the knockout blow to Japan, dropping two atomic bombs from their B-29 Superfortresses.

When the US Navy and Marine Corps entered the Second World War, they had only one effective fighter aircraft available to them: the F4F Wildcat. Fortunately, the Wildcat proved more than equal to the task of holding the line.

The Wildcat was outperformed by the lighter Japanese Zero in turning and climbing, but the Wildcat was much more robust and heavily armed than its opponent. The Wildcat was noted for its reliability and rugged construction, it was well-armoured and equipped with self-sealing fuel tanks which allowed it to absorb an extraordinary amount of punishment before being shot down. This gave it an edge against more fragile Japanese aircraft, giving it the survivability to survive the initial ambush before turning the tables and bringing its battery of .50 calibre machine guns to bear.  Even when larger, more modern fighters took over the interception role, the useful little Wildcat remained in production until the end of the war.

In 1941, a carrier-based aerial strike force assaulted the US Pacific Fleet base at Pearl Harbour, destroying over 188 aircraft for a cost of only 29 of their own, in addition to the 21 American ships that were sunk or damaged. This kickstarted the Pacific campaign, and over the next four years, Japanese, American and Commonwealth pilots would squabble over tropical island chains and windswept oceans.

In the early stages, Japanese air superiority was assured – the nimble A6M Zero and its land-based counterpart the Ki-43 Oscar were lightning quick and ferociously agile dogfighters, completely outclassing the Hurricanes, Airacobras and Wildcats put up by their opponents.

As the conflict wore on, Japanese industry was unable to keep pace with the Allies, and the Zeros and Oscars remained in service well after they had been rendered obsolete by advancing technology.

The Mitsubishi A6M Zero was a fast, modern fighter, but had no armour for the pilot. When the Zero (derived from the Japanese name Reisen – meaning Zero Fighter) was in the hands of aggressive and well-trained pilots this weakness was rarely apparent.

The A6M remains the most famous of all Japanese World War Two warplanes, significant for being the first carrierborne fighter in the world to be seen as equal to its land-based counterpart. The lack of an adequate successor as technologies moved on meant that the aircraft was developed and produced in vast numbers long after its effective limits had been achieved and surpassed by superior Allied aircraft. The A6-M2 variant was the peak dogfighting warplane of all the Zeros.

Once you’ve got to grip with the basics of Blood Red Skies, your next port of call should be the AirStrike! book. This compendium provides guidance for a huge variety of scenarios, the vast majority of which are pertinent to the Pacific theatre. It is, therefore, an invaluable resource for collectors of United States and Imperial Japanese air forces.

The book conveniently presents all of the rules from the quick start rules found in the starter box and adds many new ones suitable for expanded air operations: ground and sea targets, bombing, strafing and torpedo attacks, defensive flak and terrain. With 11 scenarios included and game profiles for all manner of targets of strategic importance in the Pacific theatre, notably airfields, aircraft carriers and fortified positions, you can adapt the included scenarios to reflect any battle you would like, particularly when incorporating the Pacific Theatre cards.

For instance, Scenario 7, Priority Target, could see the attacking player attempting to take a vital carrier out of action through a hail of flak whilst enemy fighters scramble to protect the key asset. With some adaptation, and multiple targets representing an escorting fleet, you can scale up to truly impressive games – it doesn’t even matter who attacks and defends, as both Japanese and American air forces seek to eliminate the opposing navy’s carrier support capability.

Blood Red Skies Midway is available to pre-order now, along with a flurry of additional aircraft squadrons to augment both the United States Army Air Forces & Imperial Japanese. Watch this space to find out more about the iconic aircraft, and for more in-depth looks at Blood Red Skies: The Battle of Midway. 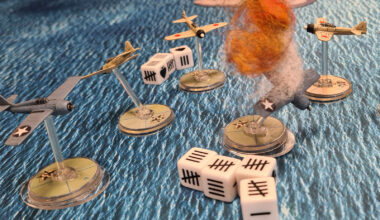 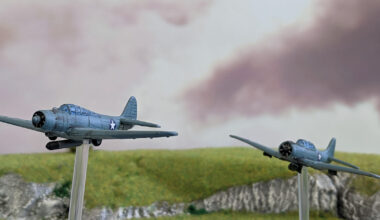 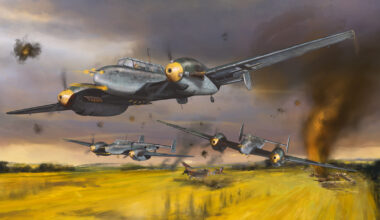 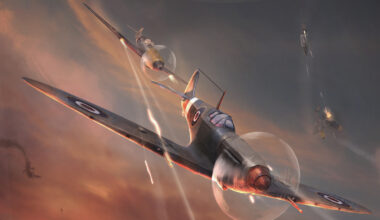