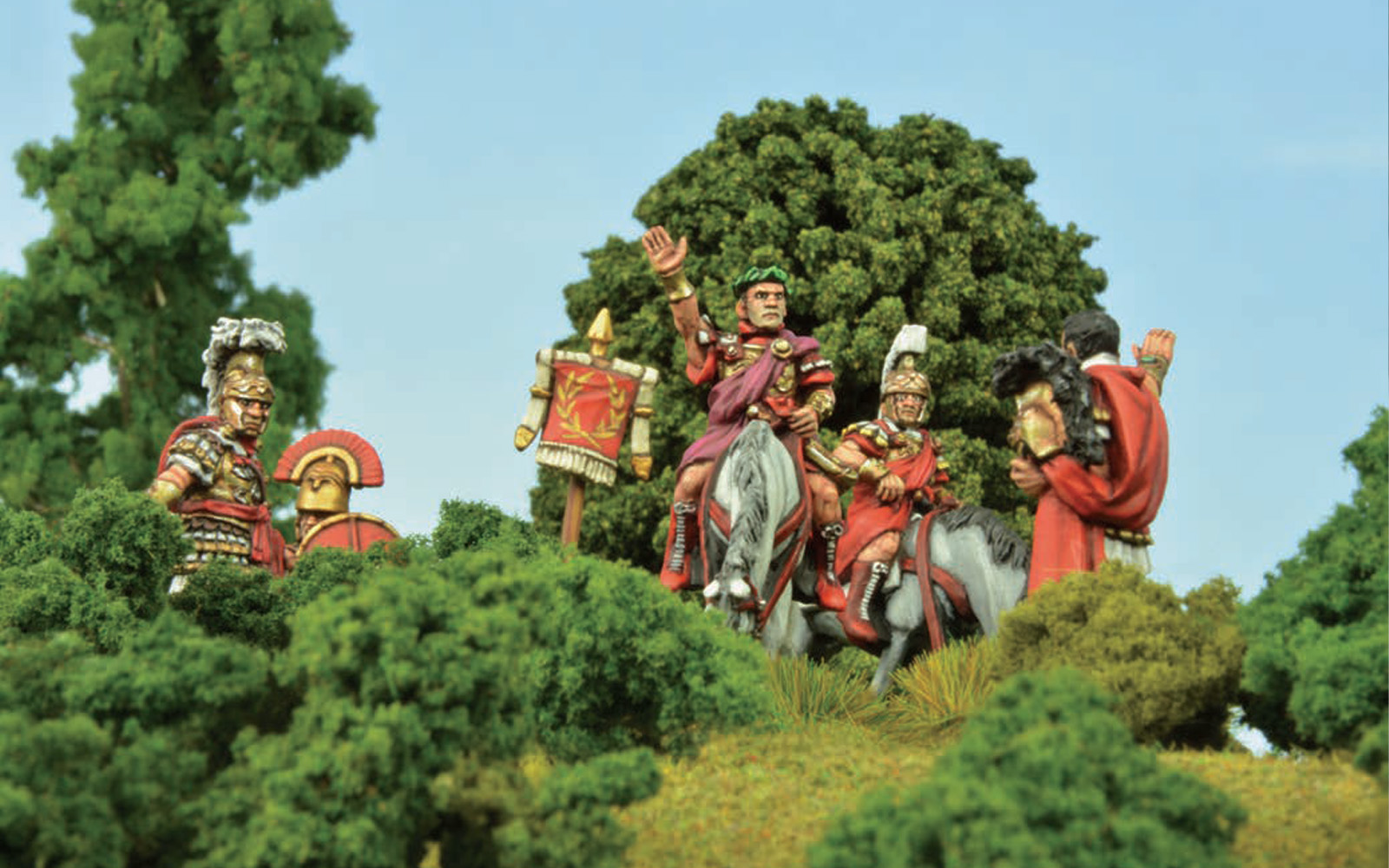 In death, the Romans made him a god. In life, Rome’s enemies suffered Gaius Julius Caesar’s wrath as if he already was one. Caesar was considered by many the greatest military commander that has ever lived. This makes him and his Legions a fascinating subject for miniature wargaming. In this article, we’ll be looking at collecting Caesarian Romans in Hail Caesar.

In battle after battle, across three continents, against multiple enemies and widely divergent military systems, Caesar emerged victorious. He never lost a battle. Chieftains and Kings kneeled before him in defeat before being led off to Rome in triumph after triumph. Caesar expanded the Empire in almost every direction but most notably into Gaul and on to the very limits of the known Roman world. He even took on the great Roman commanders in a brutal civil war, and beat them too. His life was ended, not in battle, but as a result of treacherous Roman knives wielded through jealousy and fear. Caesar’s political and military legacy would endure for 2,000 years and his name has become synonymous with power in such titles as Kaiser and Tsar. For military historians, his campaigns remain the textbook study of applied force and ruthlessness.

The mainstay of the Roman military, the legionary has dedicated most of his life to the legions and expects high rewards in land and money when he finally leaves. Until that time, Rome has equipped him with everything he needs to civilise far-off barbarian lands with pila javelins and gladius short swords.

Roman Gladii were two-edged for cutting and had tapered points, making them extremely efficient weapons for stabbing. The most common technique for the Roman Legionary would be to aim for the abdomen, as this was most likely to prove fatal. They also could prove useful for slashing at the exposed knees of a foe.

One of the signature weapons of Rome was the pilum, a thrown spear that was designed to bend or break upon impact, thus rendering it unusable by the enemy. A legionary typically carried two (collectively called pila), one heavy and one light, throwing them at charging enemies. The light pilum was thrown first, then followed by the heavier weapon at shorter ranges. Used correctly, the pila could cripple a charge before it reached the Roman line.

As the bulk of a Caesarian Roman Hail Caesar army will more likely than not be formed from legionaries, they join the ranks of our Army Muster bundles. Each Army Muster contains a trio of plastic boxed sets, plus a free complementary product that will support your new soldiers nicely on the tabletop.

Lead your armies to victory with your choice of commander. Use these superbly detailed officers as one of the many positions within a Cohort:

Julius Caesar
Gaius Julius Caesar (13 July 100BC – 15 March 44BC) – an author of prose, formidable general and politician. His actions brought down the stuttering old Roman Republic leading to the rise of the early Imperial era. Forming a triumvirate with fellow political heavy hitters Marcus Crassus and Pompey the Great who watched the home fires of the senate whilst Caesar brought conquest to Gaul; even finding time to launch several adventures to the mysterious island of Britannia. He was also the first of his ilk to bridge the infamous Rhine to subdue the ever present threats of the Germanic tribes. His greatest act (some may say of treason) was to break all known convention and lead his legions across the Rubicon river starting several years of civil war.

Marcus Antonius
More commonly known under his anglicised as Mark Antony (January 14 83BC – August 1 30BC), Antonius was a general and politician whose support was crucial for the changes that engulfed the latter half of the Republic. Antonius was administrator of Italy. His early career saw him serve as a cavalry commander in Syria under Aulus Gabinius. After Caesar’s death he took the helm of the Caesarian party attempting to restore order to a fragmented Rome, later going to war against Caesar’s adopted son Gaius Octavius.

Pompey
Gnaeus Pompeius Magnus (29 September 106BC – 29 September 48BC), from rich Italian stock and the old families of Rome, was a controversial figure prone to bouts of military genius then towering moods of petulance and paranoia. Pompey earned his spurs under Sulla and his civil war against Marius where he was granted the title ‘Magnus’ (the Great). He was also instrumental in the crushing defeat of the Sicilian pirates and the forces of Mithridates VI. He took the plaudits for defeating the renegade slave Spartacus causing a rift that was never to heal with Marcus Crassus. As Caesar led his forces against the senate, Pompey stood against his former friend. At several points Pompey could have turned the war but for the dithering and interference of the bickering senate. His life ended in ignominy at the hand of an assassin’s blade in Pelusium after his final defeat against Caesar at Pharsalus.

Crassus
Marcus Licinius Crassus (115BC – 53BC) – forming The Triumvirate alongside Caesar and Pompey, was considered one of the wealthiest Romans of his time. Another veteran of the dictator Lucius Cornelius Sulla, he gained his fortune buying and selling real estate. His first real break as a field commander came in the defeat of the renegade slave Spartacus, though he would be robbed of the coup de grâce by Pompey and his legions. As with all great egos, pettiness and mistrust tore at the fringes of their relationship. Caesar at the Lucca Conference restored order to the trio, but it was upon his Governorship of Syria that the seeds of Crassus’ downfall were planted. Crassus led an ill-fated campaign against Rome’s bitter Eastern enemy the Parthians, and fell at Carrhae. Within a handful of years, Caesar would light the touch paper that would ignite another bout of bitter civil war in Rome.

The horsemen of the later Roman Republic were unlikely to be Roman at all. Caesar famously recruited his cavalry from among the Gauls and Germans that he fought and allied with during his campaigns of conquest.

During the Civil War, Pompey raised a huge army from his strongholds in the eastern provinces. These included cavalry units from Greece and Thrace, as well as those from further afield in Anatolia and Syria. Roman cavalry were equipped along much the same lines as auxiliary infantry, with iron mail armour, bronze helmets, and a mix of stout spears and light javelins they could throw.

Although far from numerous, cavalry played a decisive part in many battles of the period, including at the battle of Pharsalus when Pompey’s cavalry drove away Caesar’s numerically inferior horsemen, only to fall into disorder when Caesar brought his infantry reserves forward to counter the milling mass of riders. The ensuing rout carried the Pompeian army with it – and that is why today we play, ‘Hail Caesar!’ and not ‘Hail Pompey!’

Caesarian Roman Scorpio
The scorpio was a smaller version of a ballista, which in skilled hands could prove extremely accurate, to the level that individual enemy soldiers could be picked off.

Caesarian Roman Ballista
Loaded with bolts or stone ‘shot’ the ballista was chiefly used during sieges to keep defenders off the ramparts whilst siege ramps, rams or towers were manoeuvred into position. These weapons were not particularly mobile, but even so, they must have proved a daunting sight when glimpsed on the battlefield.

Caesarian Roman Onager
Able to fling a missile great distances, the Onager was used for besieging forts or settlements. Onager would often be loaded with large stones or rocks that could be covered with a flammable substance and set alight.

Join the mighty Caesar at the beginning of his glittering career of conquest and refight one of his most famous battles against those heinous enemies of civilisation, the dreaded Germans, led by none other than that ambitious fiend Ariovistus of the Suebi.

March with Caesar’s legions into the land of implacable savages as our hero subjugates the barbarous Gauls and confronts that most dangerous of moustachioed monstrosities, the treacherous chieftain of the Arverni tribe, Vercingetorix.

Cross the Rubicon and cast your own dice as Caesar pursues his rival Romans across continents in the Roman Civil War, facing his most deadly challenge yet in the form of famed conqueror of the East, Pompey the Great. Fight by Caesar’s side as he wages war for mastery of the Roman World upon battlefields soaked in Roman blood.

With this supplement for Hail Caesar we invite you to come, see and conquer for yourself in a series of new scenarios representing key battles in the career of Julius Caesar. We take a detailed look at the armies of Rome and her enemies, and we consider the lives of some of the greatest Roman commanders of them all, together with suitable rules to represent them on the tabletop. 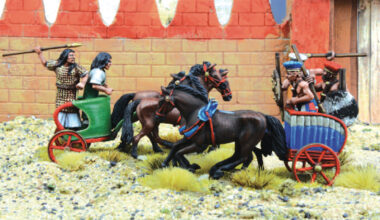 Read More
The Bronze Age was the era of the two-horse chariot.
HHail Caesar 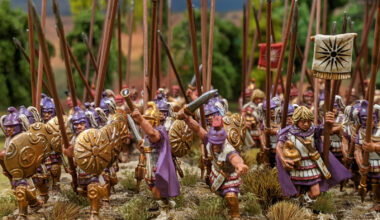 Read More
The process of collecting, painting and gaming Macedonians...