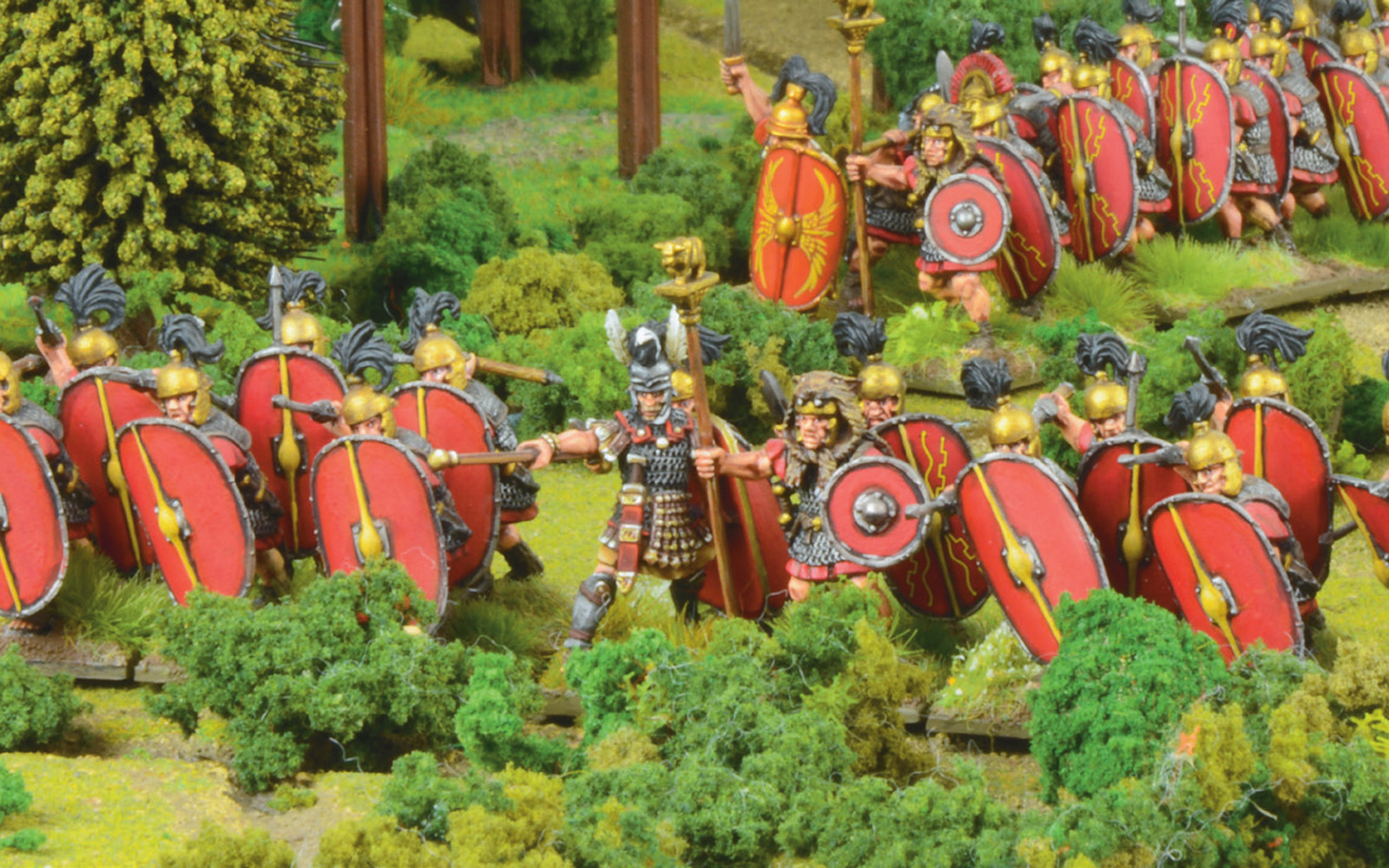 The revised edition of Hail Caesar will soon be upon us, so now’s the perfect time to take a look at some of the iconic forces covered in the game. Given that the game spans a good few millennia, there’s plenty to choose from, but there’s an obvious and iconic choice for who should be first – the clue’s in the name! As it’s Hail Caesar, let’s examine the later Republican Roman army, the men who made Julius Caesar an immortal legend and the first ‘Emperor’ of Rome.

From fairly ordinary beginnings as a reasonably generic hoplite-focussed force in prior centuries, the great strength of the Roman military was in its ability to assimilate concepts, ideas, and tactics from its enemies. During the Second Samnite War (326–304 BC), the traditional hoplite phalanx was unsuitable for the dense and rugged terrain (phalanx warfare really only being compatible with wide-open fields and plains), and the more flexible ‘manipular’ formation was quickly adopted. This served the Romans well for almost two centuries, backed up by a system of conscription from the property-owning classes very similar to the traditional Greek method, wherein each man had to provide his own weapons and equipment, and would be called up only for a limited campaigning season each year. The word ‘legion’ derives from this levy, and would remain in use for centuries to come, becoming emblematic of Roman military might.

This system proved effective enough for the Republic for many years, but as Rome’s territories expanded and her wars became more frequent, statesman Gaius Marius realised that Rome needed a larger, more modern, and above all professional standing army – in 107BC, he would implement what became known as the Marian Reforms, and the iconic Roman legionary was born. The most obvious change was the abolition of short-term ‘campaign-only’ conscription, and the introduction of long-serving career soldiers. In order to meet these manpower requirements, the property-owning qualification was abolished and equipment standardised and provided by the state – this meant that the non-landowning classes, by far the most numerous in Roman society, were now eligible for service. Alongside this was a sweeping tactical change – the manipular system was replaced with the ‘cohort’ system (a cohort generally comprised 480 soldiers and is considered to be the equivalent of a battalion in modern military parlance), which would remain in place almost until the final fall of the Empire. These were the legionaries who followed Caesar through Gaul and Britannia, and across the Rubicon.

Armed with a single-handed throwing spear (pilum) and short sword (gladius) and protected by a large oval shield (scutum), an iron or bronze helmet, and chainmail shirt, and highly-trained for war, the Marian legionary was one of the finest close-order heavy infantrymen in the world. Operating in the flexible cohort, and now a full-time soldier with a robust logistics chain (even if he did have to carry an enormous amount of equipment when on the march), he could serve with reasonable confidence of victory, with the promise of a pension and a plot of farmland to look forward to at the end of his service. With the Roman cavalry and light infantry of the earlier period now disbanded, his supporting troops would be former ‘barbarians’ recruited into the Auxilia. These warriors provided the archers, slingers, and cavalry (most famously from Crete, the Balearic Isles, and Numidia, respectively) needed for the Roman army to function effectively on the battlefield. Usually deployed well away from their home provinces in order to reduce the likelihood of desertion and rebellion, these forces are a fantastic way to get some interesting colour and variety into an otherwise uniform Roman force.

There’s no mistaking a Roman force on the Hail Caesar tabletop – serried ranks of legionaries with their iconic large shields make for an intimidating mass of troops, while the colourful auxilia are a great opportunity to really go to town with painting. For rules, the Hail Caesar Army Lists: Biblical to Early Medieval book gives us the comprehensive Marian Roman army list, complete with almost every flavour of auxiliaries imaginable (including elephants!), allowing you to tailor your force exactly as you like. Age of Caesar also provides even more detail on the period, and really is essential for anyone wanting to field a later Republican army. The versatility of the auxiliaries nicely compliments the solid punch of the legionaries, whose statistics reflect both their intensive training and excellent equipment. With a Clash and Sustain value of 7, and an excellent 4+ Morale Save, they’re archetypal melee masters, capable of getting stuck in and outlasting their opponents in a stand-up fight. The Drilled and Testudo rules are a testament to their training, and there’s the option to upgrade them to Elite if you’re in need of some serious nastiness. For support, I’m a big fan of the heavy punch of Germanic Medium Cavalry, backed up by the lethal stones of a unit of Balearic Slingers, while a swarm of Spanish Caetrati light infantry in small units can help screen the advance and break up enemy formations. Tactically, it’s hard to argue against history – get in close with the legionaries, and pummel the barbarians (or other Romans) into submission!

The great thing about having a Marian Legion in your hobby collection is that you can fight pretty much anywhere in the Ancient World – you’ll never be short of an opponent. In the worst (or perhaps best) case, you can even throw down against your fellow Romans… if you’re willing to cross that particular Rubicon!

Gather your legionaries about you and prepare to march – alea iacta est!

The new Caesar’s Gallic Wars starter set gives you two starter forces: the barbaric Gauls and the legions of the late Roman Republic – a fantastic start to your campaign to conquer all comers and write your name in the annals of history! In addition to the fantastic models it contains everything you need to play the game (dice, counters etc), and a Gallic Wars introductory guide which not only provides context and history for the battles concerned, but guides you through the steps of collecting, building and gaming a Hail Caesar army. We’ve also included an A5-sized Gamer’s Edition of the new rulebook, a conveniently stripped-back version that concentrates purely on the game mechanics, which is perfect for quickly referencing rules in the throes of battle. It makes a fine companion to the main rulebook. 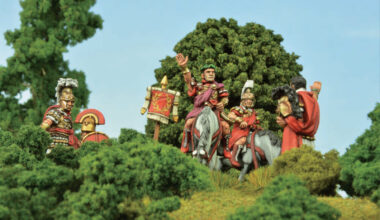 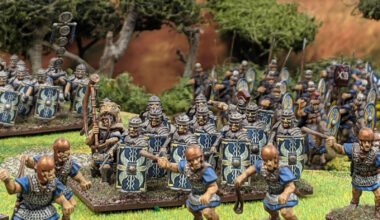 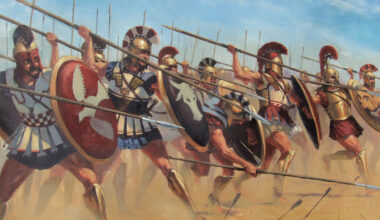 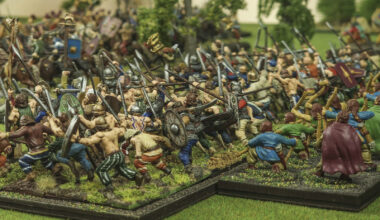 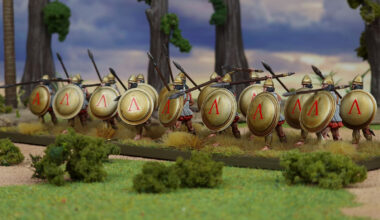 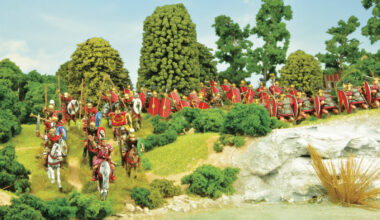