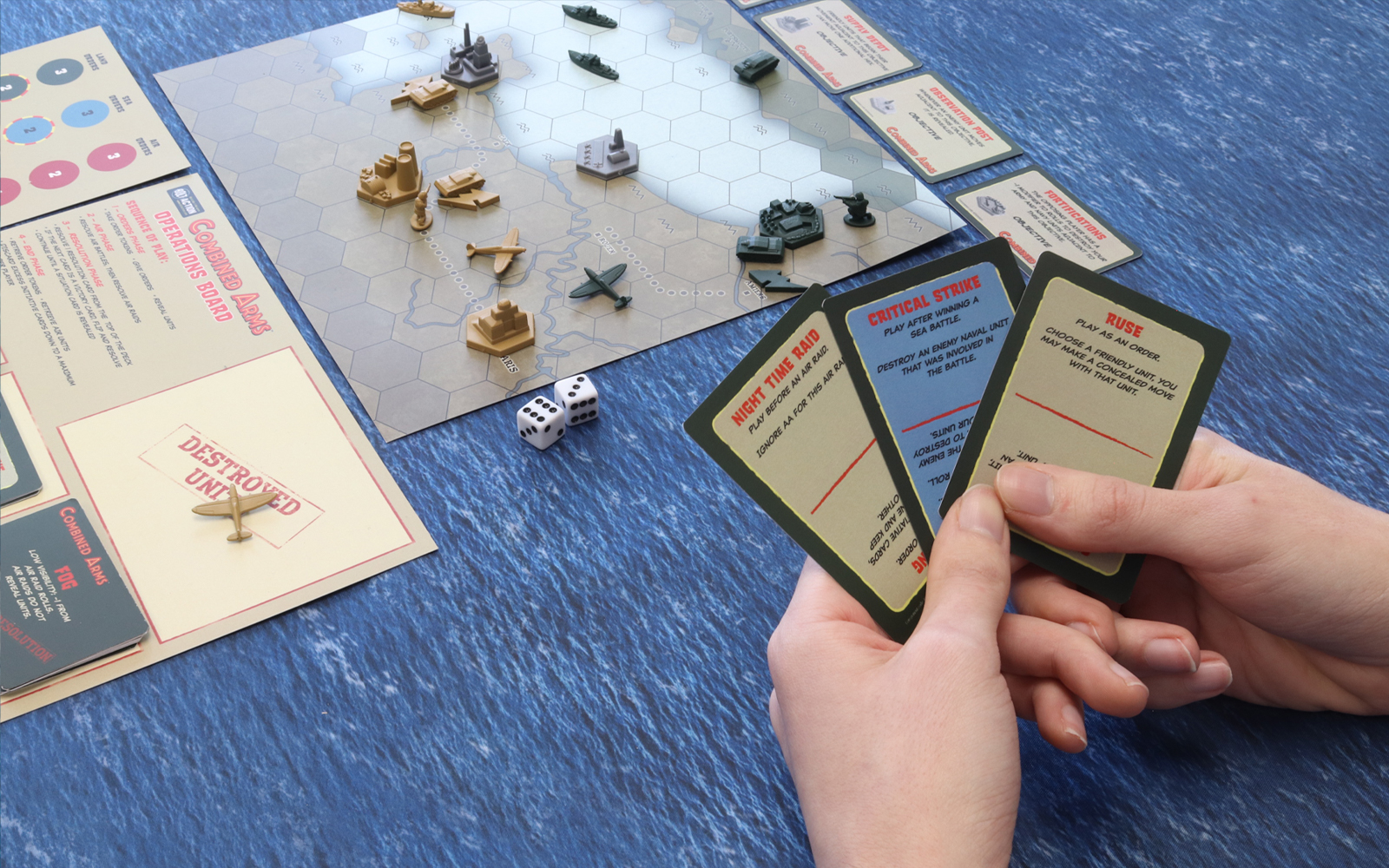 Through a simple campaign system, Combined Arms offers players a wealth of choices when commanding their land, sea & air units…

Combined Arms is, first and foremost, a World War II Campaign Game, affording players of Bolt Action, Blood Red Skies, Victory at Sea & Cruel Seas a means to play an intrinsically linked series of games that can carry long-lasting implications as you jostle for control of key objectives on one of four maps centered on key theatres of operation throughout World War II.  In this article, we’ll touch on the tactical nuances budding generals, admirals and air marshals will need to display to best triumph over land, sea and air.

One of the defining features of Combined Arms is that the campaign system is modular, not requiring that players own each game system involved; by the substitution of specific Initiative Cards, you pick and choose which tabletop gaming systems you want the campaign to involve. Own Bolt Action and Victory at Sea but have yet to take flight with Blood Red Skies? No problem! You can resolve air combat using the simple dice roll mechanics of the board game element. Own none of the systems? No problem! Play it as a self-contained board game! – of course for the most epic and encompassing of campaigns, three systems is definitely the way to go…

Each player begins with a total of six units, spread between infantry, armoured, naval and air. There are ways to expand your forces over the course of the game (by way of Escalation), but your initial choice of six will be key to your starting game plan. Your choice will be heavily influenced by the board on which you are playing – for example, the Axis has but a single position on which to place a naval unit on the North-West Europe Board, but a Pacific board campaign could easily be naval dominated.

The first phase of any campaign round is the Orders phase. Both players have three order counters, and must choose wisely what they should prioritize in any given game round. Additionally, some initiative cards can also be played as orders, with more specific game effects – so it can pay to have a larger hand than your opponent!

What’s paramount about this phase is that both players share the Orders Board and can only place counters on an empty Order space. The consideration of player Initiative should be foremost in both players’ minds throughout the campaign; it is not a given that initiative retention is always advantageous – more on that later.

When an Order counter is placed, you can move the indicated number of that type of unit – you could opt to move three land units, for example, but this eliminates your ability to make concealed moves. Another consideration is that units can be affected by multiple orders a turn, so it’s possible (though unlikely) that a unit can move across the entire board in a single turn via the right combination of Order counters and Initiative Cards. Though this is probably not wise and will leave units unsupported on the campaign map; it could set your opponent aquiver and will force a threat that your opponent will have to deal with it.

Any player can spend an Order counter to Seize Initiative, although this sacrifices potential movement options, it does net the player two initiative cards (and their opponent one) and all but guarantees that player the prime pick of Orders the following game round.

Another thing that players should be aware of, but can do little to alter, is the ‘passive’ effect on the rear of situation cards. These (often weather-related) effects can hinder well-laid plans by limiting movement for an entire campaign round, for example. As this deck is random, it is not always possible to predict what limits may be imposed in subsequent game rounds; going gung-ho one round may leave your units out of a favourable position.

Air Units operate differently from their land and sea counterparts, and are not placed on starting positions, only coming into play via Orders.

On face value, air units seem exceptionally powerful – when placed they can be placed on any empty hex on the board, ready to initiate an air raid on any adjacent hex, which allows them to roll to destroy enemy units, which for transports can be as little as a 2+ dice roll. What’s more the air phase takes place prior to the resolution phase.

This may seem daunting to deal with, but there are balancing facets and hard counters to dealing with such air units:

The Resolution Phase is where battles occur and players have the opportunity to reinforce and capture objectives. Players should also be aware that it is not always possible to conduct every action. Commonly, players will be allowed to battle once or Reinforce (place a destroyed unit back in your supply or on the board). Occasionally, no battles can be fought at all, or multiple battles can be instigated in a single turn. Again, these are tied to the randomized order of the Situation cards in the Resolution deck, and are not always possible to plan for, but players should be aware of the possibilities.

Additional complexity and advantages can be garnered in a number of ways:

This is just a taster of the flexibility and possibility offered by the campaign.

The Combined Arms box contains all you need to begin planning your campaigns, over one of four campaign maps. With a variety of objectives to choose from, random opening gambits, and the choices afforded to players, each campaign will truly be unique. 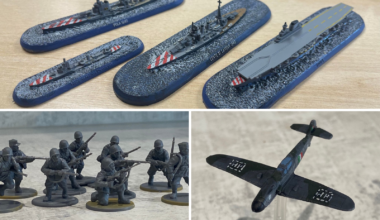 Read More
Gathering forces for land , Air & Sea ahead of the launch of the brand new campaign game.
CCombined Arms 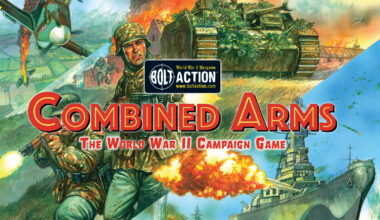