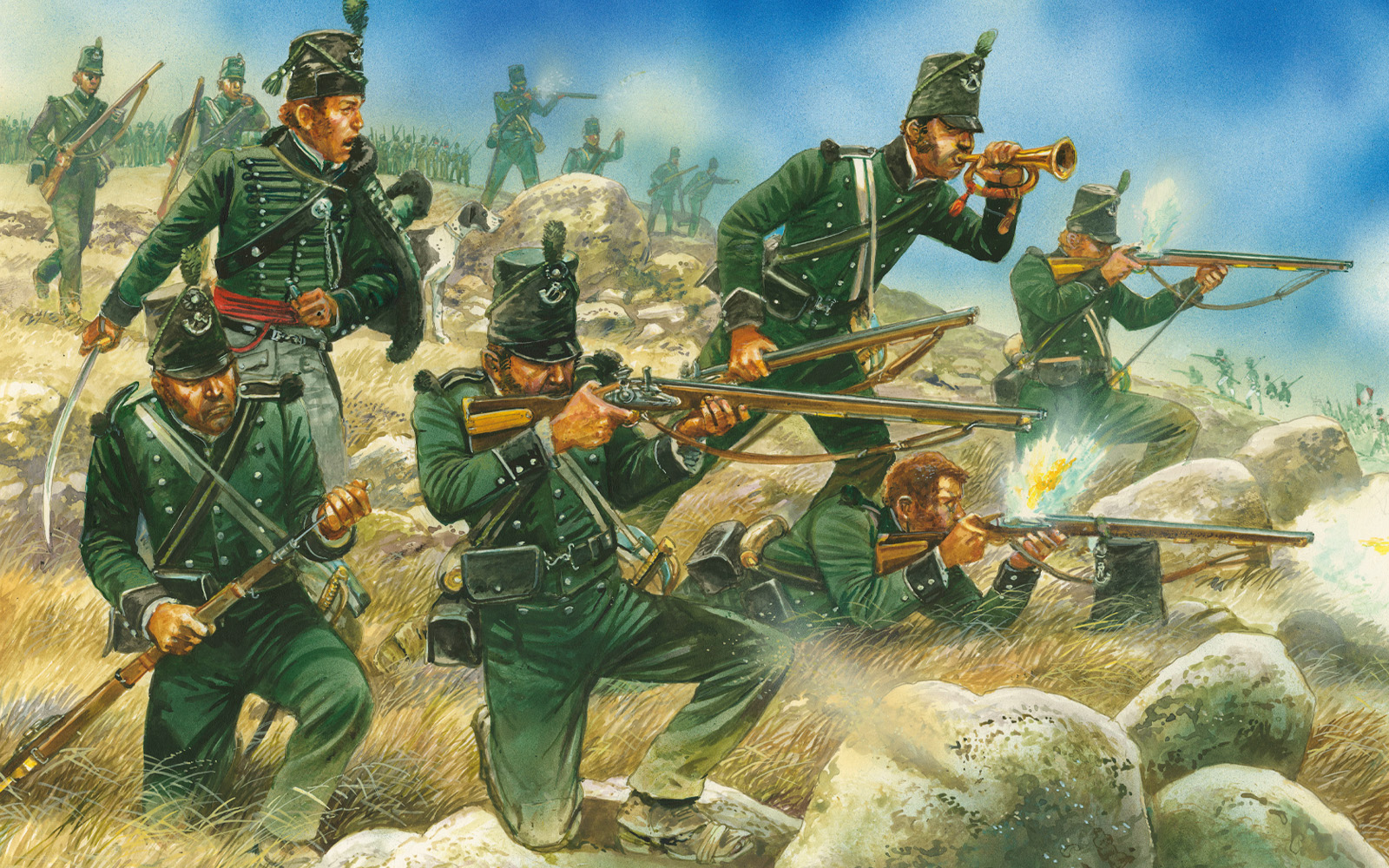 Forces of Fame: The 95th Rifles

Of all the British and allied forces to fight against Napoleon’s French, there are arguably none so famous, feted, and exalted as the legendary 95th Rifles. While their popularity may be due in part to a certain series of books and films starring everyone’s favourite Yorkshireman, there’s no denying that they were effective and dedicated soldiers; in many ways, their unique training and equipment presaged today’s modern combat infantryman.

Founded in 1800 as the ‘Experimental Corps of Riflemen’, and receiving full regimental status as the ‘95th Regiment of Foot (Rifles)’ in 1803, the unit’s raison d’etre was to provide sharpshooters and skirmishers using the now-legendary Baker Rifle. This weapon, designed by master London gunsmith Ezekiel Baker, was (while not as accurate as Messrs. Sharpe, Hagman and co. might portray) a quantum leap beyond the smoothbore muskets of the period. Rifled barrels (which imparted a ‘spin’ to the projectile that vastly improved accuracy) were by no means a new concept, with examples dating back to the late 15th Century, but had long been considered too expensive, delicate, and slow to load for regular military service. Massed volley fire from smoothbore weapons had been a far-more cost-effective solution when equipping the regular soldiery.

The 95th was a dedicated light infantry regiment, focused on skirmish warfare rather than the formations of the main battleline. Unlike their red-coated brethren, they wore dark green uniforms (earning them the nicknames ‘Sweeps’ and ‘Grasshoppers’), an early attempt at camouflage, and were trained to operate in pairs, with the men encouraged to use their initiative in battle – a far cry from the iron discipline of the line regiments! Coupled with the accuracy of the Baker Rifle, the Rifles were (after a string of less-than-successful initial ventures) more than capable of standing up to their French Voltigeur counterparts. Swiftly enlarged to a two-battalion regiment, they swiftly proved their worth on campaign.

While the 95th took part in operations in the Americas and Scandinavia, they are most notably remembered for their participation in Wellington’s Peninsular Campaigns, actually firing the first shots of the war and suffering the first British officer casualty, the unfortunate Lt. Ralph Bunbury. At Cacabelos on the 3rd of January 1809, Rifleman Thomas Plunket demonstrated both the capabilities of the Baker Rifle, and the high standard of marksmanship in the Rifles, shooting the French General de Colbert-Chabanais at a range reported to be as great as 730 metres – well beyond the expected capabilities of the weapon. This contributed substantially to the weapon’s reputation, and similar (albeit less gaudy) feats were repeated wherever the 95th fought.

Serving with distinction throughout the Peninsular War, most notably during the retreat to Corunna, the regiment was expanded again to three battalions, all of which saw service during the Hundred Days campaign, less a few companies which had been deployed to North America. At Waterloo, the 95th held the sandpit by La Haye Sainte, often fighting in square rather than skirmish order due to the marauding French cavalry. With the Baker Rifle being significantly shorter than most muskets, a longer ‘sword-bayonet’ was issued to compensate for the lack of reach – the order to fix bayonets therefore became “fix swords”, which continues to be used to this day by the 95th’s eventual successor (following a bewildering series of amalgamations and reforms), simply and aptly named ‘The Rifles’.

A detachment of the 95th is practically mandatory for any British Black Powder army, and no matter whether you prefer 28mm or Epic scale, we’ve got you covered! As the rules are the same (barring the units of measurement), we’ll deal with them in a second – let’s look at the models first!

Our 28mm ‘Chosen Men’ boxed set features a huge range of fantastically dynamic poses for your elite skirmishers, including the famous ‘reclining’ shooting stance reportedly used by Plunket for his legendary shot, as well as men fixing swords and reloading. The officer may bear a slight resemblance to a certain Sheffield United fan, but bears a far more regulation sabre. There’s even a little dog, affectionately christened ‘Rifle’, said to have accompanied the battalion in Spain for a time. Packed with character, these lads make the perfect addition to any Peninsular or Waterloo British force.

For those who prefer their battles to be truly Epic in nature, there are two varieties of these elite light infantrymen available. In the British Infantry Brigade boxed set you’ll find three stands of ranked-up Riflemen, with swords fixed – perfect for driving off the French cavalry around the Sandpit at La Haye Sainte. For those with a hankering for open-order skirmishing, the British Highlanders and Riflemen boxed set nets you four stands, each with three pairs of Riflemen working together to pick off enemy officers and NCOs. Either way, they’ll be sure to wreak havoc in the French ranks!

On the tabletop battlefields of Black Powder, the 95th come absolutely loaded with special rules, including the always-useful Elite 4+, and Sharp Shooters, allowing them to re-roll one missed shot per turn. Coupled with a rock-solid set of basic statistics, they’ll do yeoman’s work in any British army.

Here’s forty shillings on the drum… Add the legendary 95th to your army today! 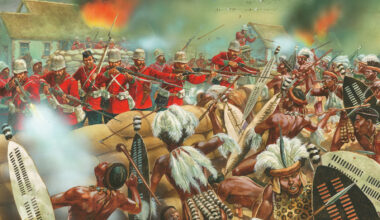 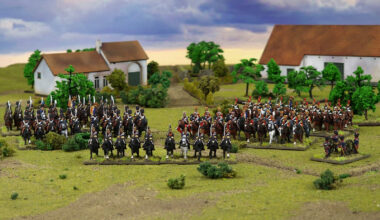 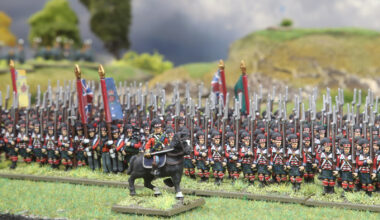 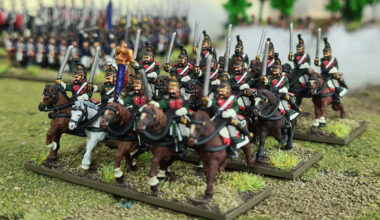 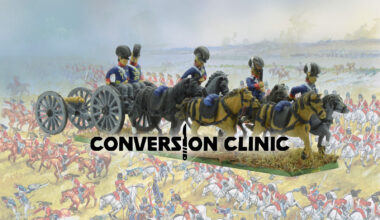 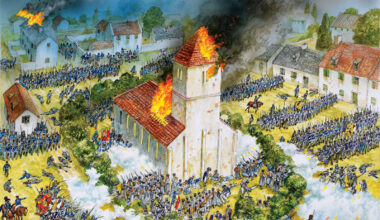