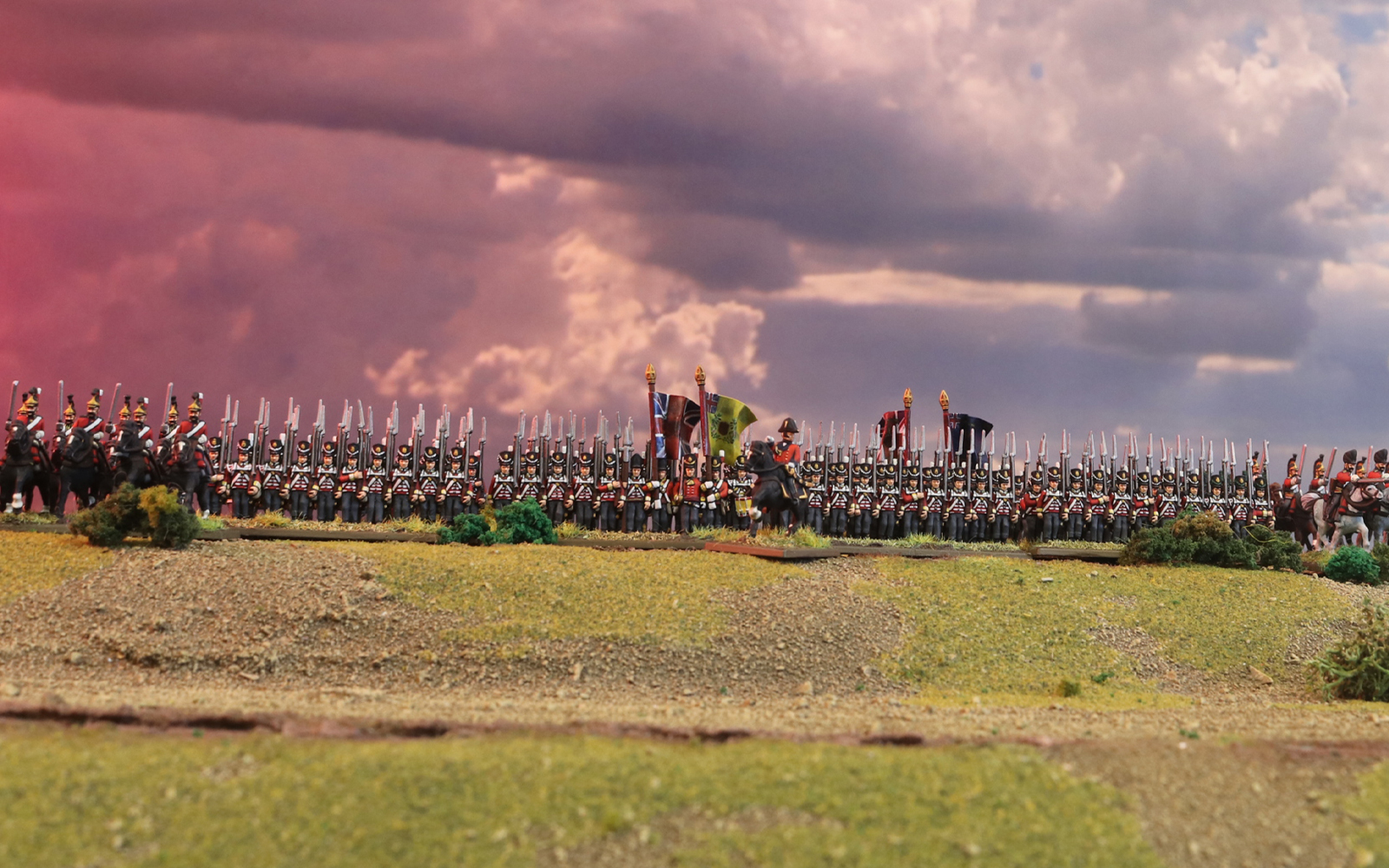 We’re delving into Epic Battles: Waterloo, starting with a look at the forces of the British army!

During the earlier Peninsular Campaign, the British had excelled in battle, whether attacking or defending, but they were unbeatable when they were formed on the reverse slope of a ridge. This defensive tactic had ensured that many French commanders were wary of attacking the English battle line. Wellington took great care to shelter his lads out of sight of the enemy and with secure flanks. He would line the crest with his artillery and throw out large numbers of skirmishers onto the forward slope to contest the French, advancing to the ‘pas de charge’ drum beat, or ‘Old Trousers’ as the British called it. the enemy, unsure as to the location of Wellington’s main force, more often than not had blundered into British lines without being in the correct formation for the tactical situation. They would then be thrown into confusion by close-range volleys whilst trying to deploy, and a loud cheer would signal a controlled bayonet charge that would sweep the disordered French away. The Hundred Days Campaign, however, would see these tactics tested to the limit, some French commanders having learned from their mistakes on the Peninsula.

Quite aside from the inclusion of a bespoke A5 softback rulebook, and the exclusive scenery piece (La Belle Alliance Inn), the British Army starter set is jam-packed with plastic sprues that will net players an extremely solid core to a British army serving in the Hundred Days campaign. Below you can see the full breakdown of the 1197 models (+ 16 guns) in the box! (Note that infantry have 20 men per base, and cavalry are based with 5 miniatures each).

The main infantry type in the British army. Hardy and reliable in battle and armed with the ‘India pattern’ flintlock musket – the famous ‘Brown Bess’ – they were the bedrock of Wellington’s Peninsular victories. These men joined the ranks for life, and pride in the traditions of those
regiments was the spiritual spine of the army. The Infantry regiments were numbered, and in 1781 were regionally designated, e.g. 32nd Cornwall Regiment of Foot. The territorial designation roughly identified where the regiment drew its recruits from. they also gained nicknames such as
the ‘Pontious Pilate’s Bodyguard’ for the 1st Royal Scots Regiment of Foot as it was the oldest regiment in the army, or ‘the slashers’ for the 28th North Gloucester Regiment of Foot, who, at the Battle of White Plains in 1775, left their muskets behind to climb a cliff and drove the rebels from their positions with their short swords. this all added to the éspirit de corps that kept men in the ranks when the heat of battle was raised.

The ‘sporting rifles’ used by the rebels in the American Rebellion, had left an indelible impression on the British military hierarchy. as a result in 1797 the 5th battalion of the 60th Royal American Regiment of Foot was equipped with rifles. Later the ‘Experimental Corps of Riflemen’ was formed; this flamboyant name changed in December 1802 to the now-famous 95th regiment of Foot.

The British carried the Baker rifle, named after its inventor, Ezekiel Baker of Whitechapel, London. The rifle was slow to load, but extremely accurate for the period. It was rare for the ten companies of a rifle battalion to fight as a whole and they were usually broken down to varying
company strengths and attached to brigades. At Waterloo several rifle formations were used primarily as Line infantry rather than skirmishers.

There were five regiments of Light Dragoons and four of Hussars that took the field at waterloo. there was no difference between the Light Dragoon and Hussar other than the expense of the latter’s uniform! British light cavalry was armed with the 1796 pattern light cavalry sabre and after 1812 the serviceable Paget carbine. British lights were capable of delivering formed charges, but they had paid dearly in the Peninsular for not being able to maintain control. They were, due to those experiences during that Campaign, more learned and capable of showing more restraint and were thus considered a great deal more controllable during the Hundred Days Campaign.

Dragoons were armed and equipped with the pattern 1796 heavy cavalry sabre, pistols and the same carbine as Household troops. One regiment of Dragoons, the 2nd Royal North British Dragoons (the Scots Greys), had many differences from the rest of the dragoon regiments. Most noticeable was the adoption of the grenadier cap, commemorating the regiment’s victory over the French regiment du Roi at Ramillies in 1706.

the Household Cavalry, men sworn to protect the king’s own regal person, were present at Waterloo. During the campaign both regiments of Life Guards and the Royal Horse Guards only had two squadrons, the units, therefore, being small with only 250 men each. The Life Guards were the most senior regiment in the British army although they are not the oldest. They were formed in 1659 but took their title in 1674 when the then king Charles II bid the regiment preserve his soul from danger as a result of a plot to kill the monarch. the royal Horse Guards were to all intents and purposes Household troops. their origins were in Cromwell’s New Model army, but after the restoration they were forgiven and entered the rolls of the king’s army.

The British Starter army, and a host of brigades, scenery packs and paint sets, are now available to order on the Warlord Webstore.

But we also wanted to address the future of the game. We’ve been asked a lot of questions since the announcement of Epic Battles: Waterloo, one of the most common of which has been:

“Will there be more supplementary releases to greater represent the armies of the Hundred Days Campaign within this scale, and crucially will the majority of these be in plastic as well?”

Emphatically, we can answer yes! Though we can’t say a great deal more at this juncture, the studio has offered up a tiny snippet of more British plastics to come!