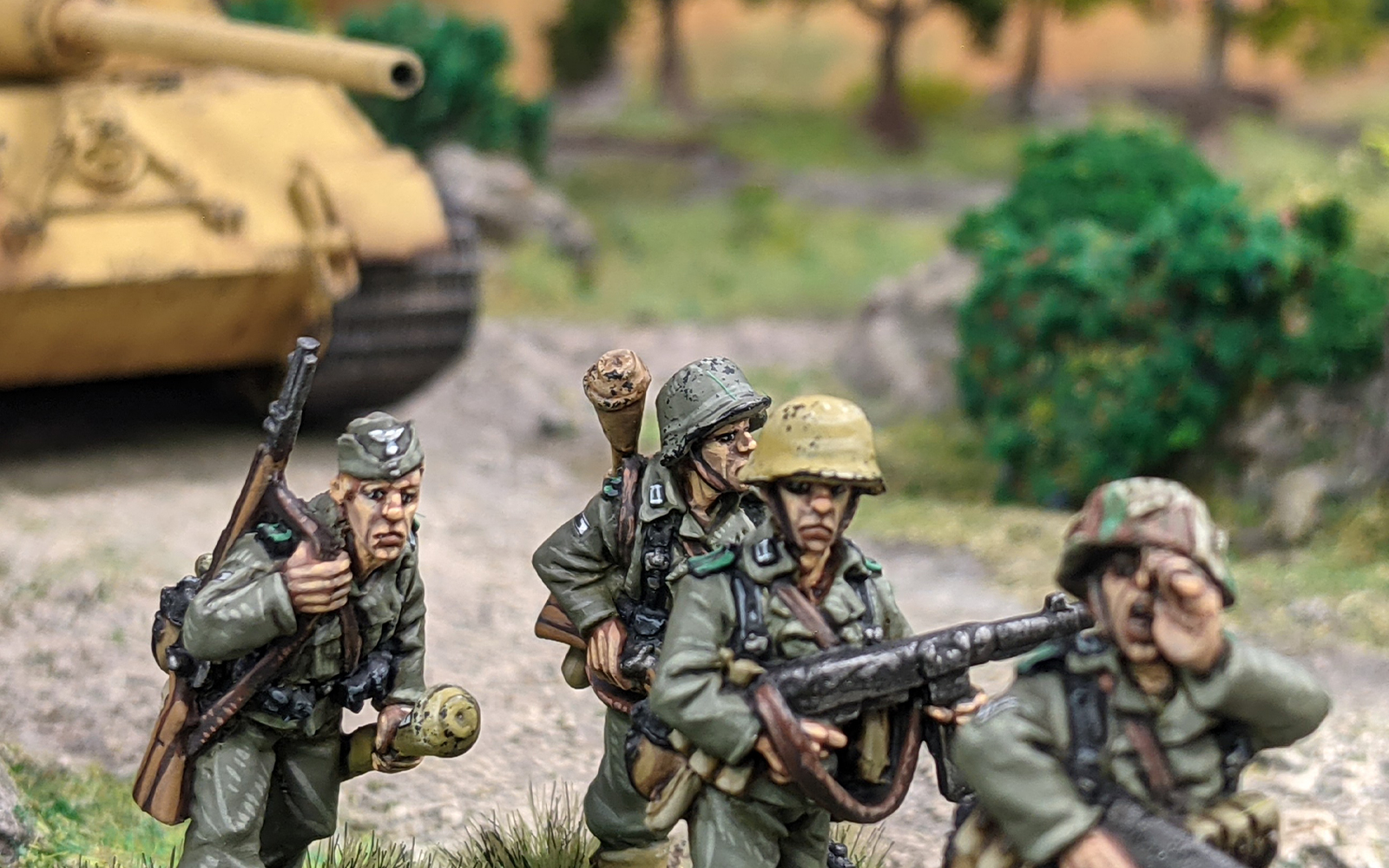 These highly experienced troops were formed from the veterans of the North Africa, Sicily & Italy campaigns.

The Panzer-Lehr Division (Armoured Demonstration Division) was formed in January 1944 as the blueprint for the proposed 1944 format of Panzer Divisions. With the anticipated Allied invasion of France, the division was established in northeast France where it would be ready to react quickly to the invasion.

The Panzer-Lehr Division was unique in a number of ways; first, its personnel were drawn almost solely from German army training school instructional staff, who in turn had been selected for instructional duties based on their combat experience and aptitude. As a result, the Panzer-Lehr was a truly elite division made up of some the German army’s best and most experienced soldiers. Second, as a blueprint for future Panzer Divisions, the Panzer-Lehr was lavishly equipped in a manner that turned out to be unsustainable for future units. Every infantry battalion was equipped with armoured halftracks, whereas in other mechanised divisions it was the norm for the majority of battalions to be transported via truck. The 130th Panzer Regiment also boasted a battalion of 89 Panther tanks to augment its 101 Panzer IVs.

When the allies landed in Normandy in June 1944, Panzer-Lehr was based in the Chartres-Le Mans-Orleans area and consequently was one of the first German units sent to reinforce the line. The division was initially employed around Caen, fighting against the British and Canadian forces advancing from Gold, Juno and Sword Beaches. By the end of June, the division had suffered some 3,000 casualties and lost 51 tanks and assault guns. By the end of the Normandy campaign, the Panzer-Lehr division was reduced to a single Panzergrenadier battalion of company strength, supported by 20 tanks and scant engineering and artillery support. What was left of the division was finally removed from the fighting in late August. It would go on to fight in the Ardennes, the Netherlands, and the defence of Germany itself.

Within the pages of Campaign D-Day: British & Canadian Sectors you’ll find a dedicated theatre selector (pages 102-104) enabling you to wield this formidable fighting force on the tabletop. In doing so, your army will benefit from the following special rules:

Demonstration Division
The Panzer-Lehr is made up of some of the very best soldiers available to the German army. All units must be veteran, with the exception of transport vehicles and tows which may be regular or veteran.

Elite Leadership
Panzer-Lehr officers were hand-picked for their experience and leadership. When Panzer-Lehr officers successfully pass an order check, they discard D2 pin markers, rather than just 1. This benefit also extends to any unit activated via the You Men, Snap to Action! rule.

Those men that survived long enough quickly learnt the art of fieldcraft and became formidable opponents, battle-hardened and well-equipped – a match for any enemy infantry. Panzer grenadiers of the Panzer-Lehr Division were lavishly equipped, riding to battle in half-tracked, armoured carriers – as opposed to 90% of other Panzer divisions, who had to rely on trucks or even their own feet.

The new Panzer-Lehr box set is ideal to represent your veteran Grenadiers when fielding a Panzer-Lehr Division.

When the concept of a fully mobile and tank equipped panzer division was being developed, there was a requirement issued for an armoured infantry carrier capable of accompanying the tanks on the battlefield and to allow infantry units (to be known as panzer grenadiers) to keep pace with an advance. The Hanomag – named after its manufacturer Hannoversche Maschinenbau AG – was the ubiquitous German half-track used throughout World War II to transport mechanised infantry units.

The carrier version was adapted to various roles including the addition of close support weapons such as anti-tank guns, flamethrowers, anti-aircraft guns, and even rockets. Engineering variants included bridge and telephone line layers, whilst further examples were built as radio cars, ambulances and command vehicles. The standard infantry carrier version was the 251/1, which was able to carry up to 12 men in addition to its own crew. It was armed with a single pintle-mounted MG34 machine gun, and had a second rear mount for an anti-aircraft machine gun, which was often not used.

The Panzer IV was developed before the start of the war, as a 20 tonne chassis to carry a 75mm howitzer for close infantry support. It was the largest German tank at the onset of war, and the earliest mark, the Ausf A, saw combat in Poland and France. Like the Panzer III, it would also see a lot of development throughout the war, reaching its finals marks, the Ausf H and Ausf J, by the later years. The Ausf A was developed into the Ausf B, C, D, E and F, all with minor improvements to the engines, suspension and so forth, but fundamentally it remained the same tank. Only with the arrival of the F2 and the addition of a long 75mm high-velocity anti-tank gun did the Panzer IV become a tank capable of taking on enemy tanks of the time. The F2
(known as ‘the Pz IV special’ to Allied forces in the desert) evolved into the G (the same vehicle in effect), and the G evolved into the H with the addition of a slightly improved L/46 75mm gun and better frontal armour. The H would become the standard battle tank, until the final Ausf J was developed, but this only had minor changes, such as the improvement of the gearbox and of the turret roof’s armour. If any tank can claim to be the ‘standard’ battle tank of the German Army then it is the Panzer IV. It was not well-liked by its crews, who were often veterans and very aware of the tank’s drawbacks. They nicknamed it the Sardinenbüchse, ‘Sardine Tin’ due to its relative lack of armour.

Encounters with the Russian T-34 and KV-1 tanks during Operation Barbarossa came as a tough surprise to the German Army, as they discovered their standard battle tank was outclassed by superior designs. Captured T-34s were studied and, rather than just copy them as was initially suggested, a new medium tank was developed from the Russian design. The result would be the Panzer V Panther, but it would not be ready for combat until 1943. Even then, having rushed development and trials, the Panther was beset by mechanical problems and most broke down. After these problems were ironed out, the Panther developed into a superb tank. Replacing the Panzer IIIs in the Panzer Regiments, it was (arguably) the best tank of the war. Fast, heavily armoured to the front, and with a very powerful 75mm L70 gun, it proved itself a tank well ahead of its time. The Panther was developed through three marks. The Ausf D came first, all production of this ceased in 1943 in favour of the later models. It was followed by the A and finally the perfected G. For a Panzer-Lehr division, we are primarily concerned with the A variant.

Read More
One of the most daring, dangerous, and infamous attacks of D-Day was the US Army Rangers’ assault on the guns of Pointe Du Hoc.
BBolt Action 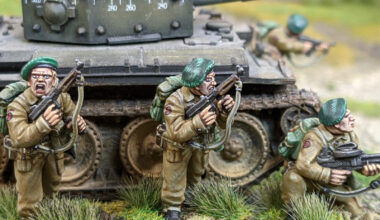 Read More
Though it was best known for its major role in the North African Campaign, the 21st Panzer Division were also fierce defenders in Normandy on D-Day.